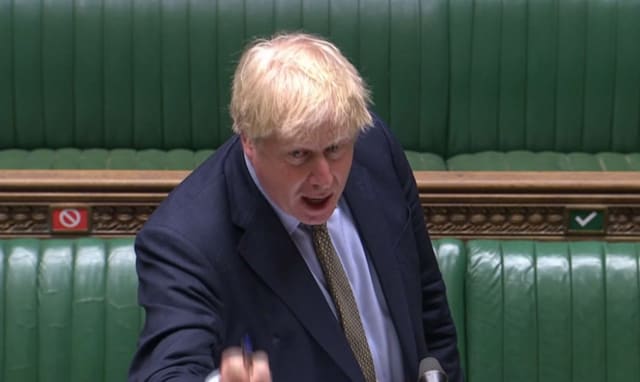 The Prime Minister accused “Islingtonian Remainers” of seizing on the Intelligence and Security Committee’s (ISC) report to cast doubt on the 2016 referendum result.

He also said Sir Keir Starmer was unable to “bring himself to accept” people supported leaving the EU to “take back control” of laws, cash and trade policy.

Labour leader Sir Keir had questioned why the Prime Minister “sat” on the ISC report into Russian interference in UK politics for 10 months and why the Government had not filled gaps in the UK’s national security legislation.

He pressed Mr Johnson to “look again” at the licensing for Moscow-backed TV network RT, formerly Russia Today, to operate in the UK.

The ISC report released on Tuesday found the Government failed to fully assess the impact Russian state-run media and “troll” accounts could have had on the EU referendum.

The committee said open-source studies had pointed to the prevalence of anti-EU or pro-Brexit stories on the RT and Sputnik networks as evidence of Russian attempts to influence the process.

Speaking at Prime Minister’s Questions, Mr Johnson said he took “the strongest possible action” against Russia when he was foreign secretary.

He added: “(Sir Keir) sat on his hands and said nothing while the Labour Party parroted the line of the Kremlin when people in this country were poisoned at the orders of Vladimir Putin.”

Sir Keir replied: “I stood up and condemned what happened in Salisbury and… I supported then-prime minister (Theresa May) on record, so I’d ask the Prime Minister to check the record.”

He asked about delays in bringing forward new security legislation, and Mr Johnson insisted new laws are coming in connection with espionage, theft of intellectual property and sanctions.

The Prime Minister went on: “Let’s be in no doubt what this is really all about – this is about pressure from the Islingtonian Remainers who have seized on this report to try to give the impression that Russian interference was somehow responsible for Brexit.

“That’s what this is all about. The people of this country didn’t vote to leave the EU because of pressure from Russia or Russian interference, they voted because they wanted to take back control of our money, our trade policy and our laws.”

Sir Keir accused the Prime Minister of reading “pre-prepared answers” rather than addressing national security concerns, and Mr Johnson replied: “There’s no other Government in the world that takes more robust steps to protect our democracy, to protect our critical national infrastructure and to protect our intellectual property from interference by Russia or by anybody else.”

Mr Johnson said the criticisms were “motivated by a desire to undermine the referendum” on EU membership.

Sir Keir pressed for action against “Kremlin-backed disinformation” and highlighted RT’s operations in the UK.

Mr Johnson said Sir Keir should have called out Labour former leader Jeremy Corbyn “when he took money for appearing on Russia Today”, adding: “The leader of the Opposition has more flip-flops than Bournemouth beach.”

Tory MP Alexander Stafford (Rother Valley) was then accidentally called early by the Speaker before Sir Keir could ask his sixth question.

The Labour leader later got his chance, telling Mr Johnson: “Pre-prepared gags on flip-flops – this is the former columnist who wrote two versions of every article ever published.

“In case the Prime Minister hadn’t noticed, the Labour Party is under new management and no frontbencher of this party has appeared on Russia Today since I’ve been leading this party.”

He finished by asking for targeted sanctions against those responsible for abuse against Uighur Muslims in China, adding: “This simply cannot be allowed to stand in the 21st century.”

Mr Johnson said Foreign Secretary Dominic Raab had condemned the treatment of the Uighurs and the UK had developed its new sanctions regime.

Labour former minister Ben Bradshaw accused Mr Johnson of “knowingly and repeatedly put his own personal and party interests before the national security” by delaying publication of the ISC report, something the Prime Minister denied.

Mr Johnson repeated his claim that the “rage and fury of the Remainer elite” was being displayed in response to the ISC report.