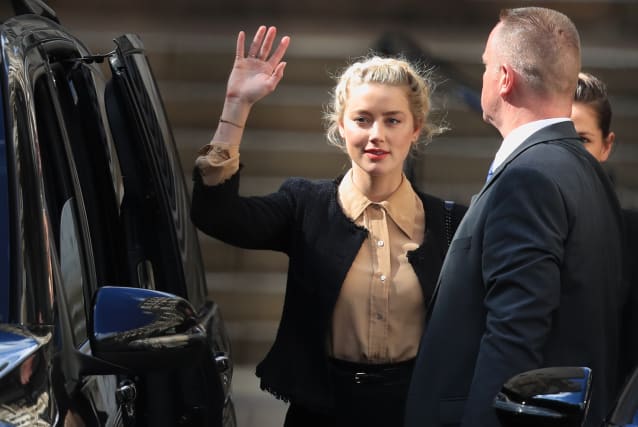 Amber Heard has denied telling “lies” about her claims Johnny Depp was violent towards her on a day in which she told the High Court the star threw bottles “like grenades” during an alleged explosive row in Australia.

The Aquaman actress claimed she was “too scared to look behind” her as the actor threw “all the bottles in reach”.

On the twelfth day of Mr Depp’s blockbuster trial against The Sun newspaper, Ms Heard faced questioning over several allegations she has made against the actor about his violent conduct in the course of their relationship – all of which he denies.

The Edward Scissorhands actor is suing the tabloid’s publisher, News Group Newspapers (NGN) and its executive editor Dan Wootton over an April 2018 article which labelled him a “wife beater”.

Ms Heard, 34, was asked about an alleged incident in Australia in March 2015 – which she has previously described as a “three-day hostage situation”.

Eleanor Laws QC, representing Mr Depp, 57, put it to Ms Heard that during the alleged Australia episode the actress “worked yourself into a rage, screaming at him” and threw a glass bottle.

Ms Heard said she got angry “at times” but “not to the extent where I would throw anything at him offensively”.

In response to a suggestion from Ms Laws that she threw a bottle at Mr Depp’s head, smashing a mirror behind him, Ms Heard said she did break a bottle “very early” one evening of the trip, and it was “before Johnny had started to throw the bottles at me”.

Ms Heard claimed the couple were in an argument about Mr Depp drinking and when she confronted him, he offered her the bottle.

She said Mr Depp was “teasing me to take it” and then pulling it away.

Ms Heard went on to say she “reached for it a second time and I smashed it on the floor in between Johnny and I”, adding: “I regret I did that.”

She told the court: “He started picking them (bottles) up one by one and throwing them like grenades.

“I was too scared to look behind me. He threw all the bottles that were in reach, all except for one which was a celebratory magnum-sized bottle of wine.”

Ms Heard said she remembered that was the only bottle not smashed out of 30 or so.

The court has previously heard that Mr Depp’s finger was severed during the alleged episode.

Ms Laws put it to Ms Heard that the injury was caused by her “throwing a bottle in his direction, smashing it down and severing the tip of his finger with glass”, to which Ms Heard replied: “No.”

Ms Laws said: “According to you, Mr Depp sliced his finger off all on his own … and then carried on attacking you.”

Ms Heard said: “Yes, he did. I don’t think he meant to sever the finger but yes he did continue the attack.”

The actress was asked about an alleged incident of domestic violence in Los Angeles in December 2015, which she described in a witness statement as “one of the worst and most violent nights of our relationship”.

Ms Heard alleges that Mr Depp slapped her, dragged her by the hair through their apartment – pulling clumps of her hair out – and then repeatedly punched her in the head, which he denies.

The actress became visibly upset as Ms Laws read through passages of her witness statement detailing the alleged abuse.

She was asked: “That’s just a complete set of lies, isn’t it?”

The court heard that medical notes made by a nurse, Erin Boerum, who saw Ms Heard shortly after the alleged incident in Los Angeles, recorded that Ms Heard was “actively bleeding on her lip” and that she “briefly looked at the client’s scalp but was unable to visualise haematomas the client described”.

When it was put to her that she had no bruises when she saw Ms Boerum, Ms Heard said: “I had two black eyes, a broken nose, a broken rib … I had bruises all over my body.”

After she gave more details of injuries, Ms Laws suggested: “This is just nonsense, isn’t it? She (Ms Boerum) didn’t see any bruising … you had just bitten your lip because there was fresh blood on it. Had you just done that for her benefit?”

Ms Heard replied: “Of course not.”

Ms Laws also asked Ms Heard about her first allegation of violence against Mr Depp, which she says happened after she remarked on his “Wino Forever” tattoo.

Ms Heard said it was the “first time I had been hit like that since I was a child”, adding: “It didn’t feel painful necessarily, it just felt like a pop.

“The first time he hit me, I didn’t even know he was serious, I was laughing, I thought he was joking … I just didn’t know.”

Ms Inglessis told the court she had “many conversations” with Ms Heard about her relationship with Mr Depp and that the restraining order Ms Heard obtained in May 2016 did not come “out of the blue”.

Mr Depp is suing NGN and The Sun’s executive editor Mr Wootton over the publication of an article on April 27 2018, with the headline: “Gone Potty: How can JK Rowling be ‘genuinely happy’ casting wife beater Johnny Depp in the new Fantastic Beasts film?”