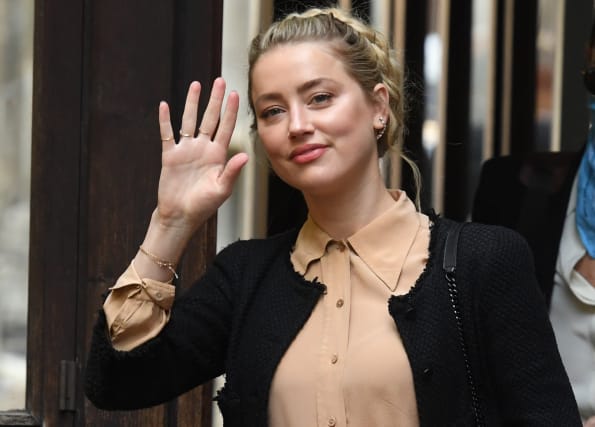 The Aquaman actress claimed she was “too scared to look behind” her as the actor threw “all the bottles in reach” – around 30 in total.

Ms Heard, 34, was asked about the alleged incident in Australia in March 2015  – which she has previously described as a “three-day hostage situation” – as she entered the witness box for the third day.

She is giving evidence in her ex-husband’s libel claim against the News Group Newspapers (NGN) publisher of The Sun newspaper, and its executive editor Dan Wootton over an April 2018 article which labelled him a “wife beater”.

Ms Heard has accused Mr Depp of repeatedly assaulting her during the Australia trip, fuelled by drink and drugs, which he denies.

On Wednesday, Eleanor Laws QC, representing Mr Depp, 57, put it to Ms Heard that during the alleged Australia incident the actress “worked yourself into a rage, screaming at him” and threw a glass bottle.

Ms Heard said she got angry “at times” but “not to the extent where I would throw anything at him offensively”.

In response to a suggestion from Ms Laws that she threw a bottle at Mr Depp’s head, smashing a mirror behind him, Ms Heard said she did break a bottle “very early” on the second evening of the trip, and it was “before Johnny had started to throw the bottles at me”.

She claimed the couple were in an argument about Mr Depp drinking and when she confronted him, he offered her the bottle.

Ms Heard told the court: “He said, ‘Oh yeah, you want it? Here, take it’, and at that point drinking had already been… he had already given it up for a while and it was on the list of ‘if this happens, I leave’ sort of thing. It was no-fly.

“And he gestured to offer it to me and I reached to take it and he pulled it back.”

She said Mr Depp was “teasing me to take it” and then pulling it away.

Ms Heard went on to say she “reached for it a second time and I smashed it on the floor in between Johnny and I”.

Ms Heard then told the court: “He started picking them (bottles) up one by one and throwing them like grenades.

“I was too scared to look behind me. He threw all the bottles that were in reach, all except for one which was a celebratory magnum-sized bottle of wine.”

Ms Heard said she remembered that was the only bottle not smashed out of 30 or so.

The court has previously heard that Mr Depp’s finger was severed during the alleged incident, with the film star claiming Ms Heard was responsible, which she denies.

Ms Laws put it to Ms Heard that the injury was caused by her “throwing a bottle in his direction, smashing it down and severing the tip of his finger with glass,” to which Ms Heard replied: “No.”

She also denied stubbing a cigarette out on Mr Depp’s cheek, saying the Pirates Of The Caribbean star did it to himself.

Ms Laws said: “You did it, didn’t you?” To which Ms Heard replied: “No, Johnny did it right in front of me, he often did things like that.”

Ms Laws said: “According to you, Mr Depp sliced his finger off all on his own… and then carried on attacking you.”

Ms Heard said: “Yes, he did. I don’t think he meant to sever the finger but yes he did continue the attack.”

The actress, 34, has accused Mr Depp, 57, of both verbal and physical abuse throughout their relationship – allegedly punching, slapping, kicking, headbutting and choking her, as well as displaying “extremely controlling and intimidating behaviour”.

However, Mr Depp says he was not violent towards Ms Heard, claiming it was she who was violent to him.

Ms Heard’s evidence will continue, before her friends Melanie Inglessis and Joshua Drew are due to give evidence by video-link from LA later in the afternoon.

Mr Depp is suing NGN and The Sun’s executive editor Dan Wootton over the publication of an article on April 27, 2018, with the headline: “Gone Potty: How can JK Rowling be ‘genuinely happy’ casting wife beater Johnny Depp in the new Fantastic Beasts film?”