US wants trade deal with UK ‘finalised before too long’ 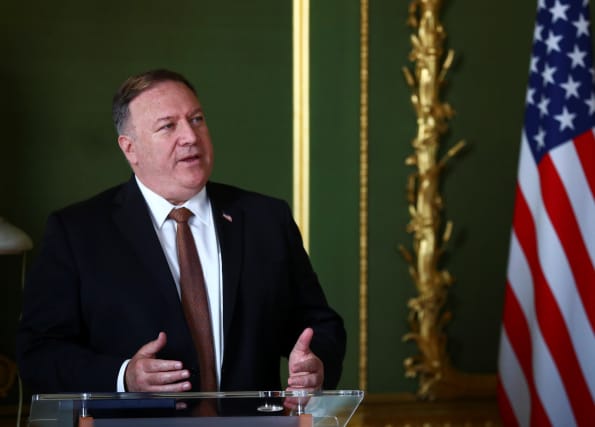 US Secretary of State Mike Pompeo said he hopes a trade deal with the UK that reduces trade barriers can be done “as soon as possible”.

Mr Pompeo is visiting the UK and met with both Prime Minister Boris Johnson and Foreign Secretary Dominic Raab on Tuesday.

Speaking at a press briefing at Lancaster House in central London following his talks with Mr Raab, the former US army officer confirmed there was “more work to do” before a trade deal could be signed off after almost two months of negotiations.

But he confirmed that he told Mr Johnson during a Downing Street summit how Washington wanted a deal “finalised before too long”.

Reports surfaced last month that the trade talks with the US, which started in May, were unlikely to produce an agreement before the presidential elections in November when US President Donald Trump is seeking re-election against Democratic rival Joe Biden.

Mr Pompeo told reporters: “We’ve completed two rounds, we’ve got more work to do, with a third round scheduled for later this month.

“It is the primary focus of the United States to see if we can make progress on this and bring it to a close just as soon as possible.

“I spoke to the Prime Minister this morning about this and I hope we can get it finalised before too long.”

Cabinet minister Mr Raab and Mr Pompeo were due to meet with the British-American Business Council following their bi-lateral discussions.

Mr Pompeo said the meeting with business figures would assist the two countries in getting to the “right place, which is reducing trade barriers” while also providing jobs and wealth on both sides of the Atlantic.

In his opening speech, Mr Raab said: “We are each other’s biggest investors.

“Our annual trade relationship is worth over 300 billion US dollars, we think we can do even better than that.

“Every morning there are just under 1.5 million Americans who go to work for a British company, it is around the same amount of Brits going to work for American companies.

“I think that reiterates the kind of win-win free trade deal we are determined to achieve between our countries, good for jobs and good for consumers as well.”

The documents were picked up by then Labour leader Jeremy Corbyn who said they were evidence the Conservatives were preparing to open up the NHS to US pharmaceutical companies.

Also under discussion during the meeting was Iran, the coronavirus crisis, Nato and the Middle East peace process.

During the 12-minute appearance in front of the media, Mr Pompeo welcomed the action taken by the UK on extending the United Nations arms embargo on Iran.

He said: “I welcome the recent statement from the United Kingdom, France and Germany recognising that allowing the embargo to expire would have major implications for regional and security stability.”

Mr Pompeo heralded the “special relationship” between the US and UK and called Britain a “true ally”.

He continued: “The special relationship, you can see it on days like today where it translates into having candid, frank discussions on important matters which really cut to the heart of how we can work together to secure freedom for our peoples in each of our two countries and both of our countries be forces for good together around the world.”