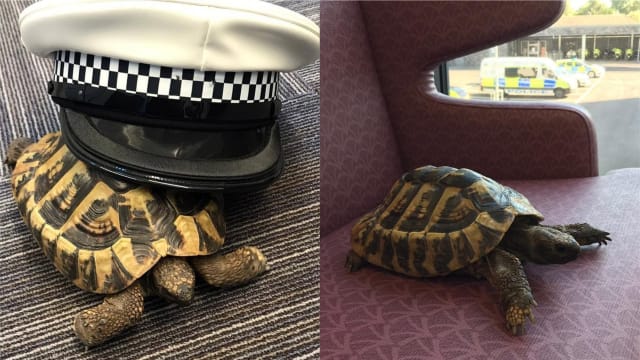 A tortoise was given a VIP tour of a police station after being spotted having “infiltrated” the grounds.

The intrepid reptile, named Pasquale, was spotted in the grounds of Exeter Police Station on Friday, having gone missing from his home five days earlier.

In a Facebook post, Devon and Cornwall Police said: “Last Friday officers at Exeter Police Station spotted that an animal visitor had infiltrated the grounds.

“A local tabby roaming around is a regular sight, but officers have never seen a lost tortoise hand itself in before.”

While at the station – which was opened earlier this year – the tortoise was given an access-all-areas tour, and even got try on a hat.

Pc Maria Canning, who looked after Pasquale while his owners were found, said: “Pasquale was very lucky and had to cross some busy roads to get here. He had a great little holiday and we’re all really glad he got home safe.”