Pompeo and Johnson discuss China as tensions mount with Beijing 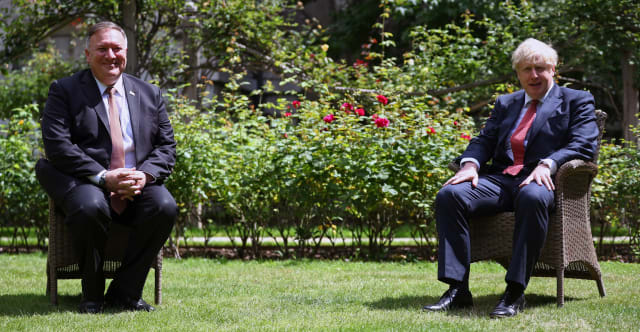 Boris Johnson and US Secretary of State Mike Pompeo have had “candid” talks as tensions mounted between China and the Western allies.

The meeting followed the Government’s U-turn on Chinese tech giant Huawei’s involvement in 5G networks, a move welcomed by Washington, and after Monday’s suspension of the extradition treaty with Hong Kong in response to Beijing’s national security law.

China has warned Britain will “bear the consequences” of its actions.

A spokesman for the Chinese Embassy in London said in a statement Beijing had expressed its concerns over the UK interfering in Hong Kong matters “which are internal affairs of China”.

Downing Street said Mr Johnson and Mr Pompeo, along with Foreign Secretary Dominic Raab, discussed “shared global security and foreign policy issues, including China’s actions in Hong Kong and Xinjiang” where there are concerns about the abuse of the Uighur Muslims.

They also discussed the importance of the Five Eyes alliance, the US, UK, Canada, Australia and New Zealand, taking an “ambitious approach to working together on the technologies of the future”, something apparently aimed at ending the reliance on Chinese technology from firms such as Huawei.

Mr Pompeo said it was a “constructive” visit and “our two countries’ long-standing, strong bilateral relationship has laid the foundation for the candid discussion on issues ranging from 5G telecommunication to our negotiations for a US-UK free trade agreement”.

Downing Street rejected China’s condemnation of the UK’s actions over the extradition treaty and the extension of an arms embargo to cover Hong Kong.

It was a “reasonable and proportionate response to China’s failure to live up to its international obligations with respect to Hong Kong”, the Prime Minister’s official spokesman said.

The UK has accused China of breaking the terms of an international treaty by imposing the national security law, which the Government believes undermines some of the autonomy Hong Kong has previously enjoyed.

But Beijing has reacted furiously to the UK’s actions over both Hong Kong and Huawei.

A spokesman for the Chinese embassy said:  “Now the UK side has gone even further down the wrong road in disregard of China’s solemn position and repeated representations.

“It once again contravened international law and the basic norms governing international relations and blatantly interfered in China’s internal affairs in an attempt to disrupt the implementation of the national security law for Hong Kong SAR and undermine the city’s prosperity and stability.

“China urges the UK side to immediately stop interfering in Hong Kong affairs, which are China’s internal affairs, in any form.

“The UK will bear the consequences if it insists on going down the wrong road.”

Ahead of his meeting with the Prime Minister, Mr Pompeo attended an event hosted by the Henry Jackson Society think tank with senior Tory MPs.