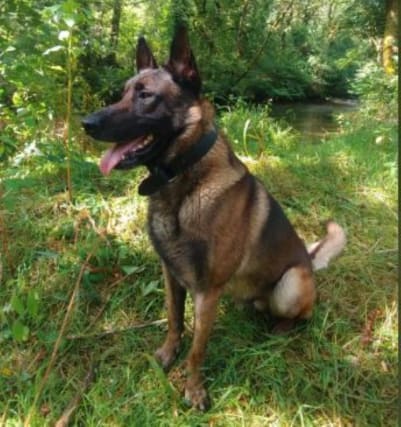 A police dog helped track down an elderly couple who had fallen into a ditch.

The husband and wife, who are both in their 80s and have dementia, had not been seen for more than two hours.

Searches began in the Haverfordwest area of Pembrokeshire, with every available police unit dispatched to help.

Police dog Rey quickly found a piece of bedding and was able to track the scent into a field.

Officers then used the Pembrokeshire rural crime team's 4×4 to search the area, which was inaccessible to police cars.

At 12.30am, they spotted the couple in a ditch, where the woman had fallen and hurt her back.

Emergency first aid was carried out by officers until an ambulance arrived.

The couple were then taken to hospital and are expected to make full recoveries.

Inspector Reuben Palin said: "This was a superb effort by all involved to find this elderly and vulnerable couple.

"The couple had not been seen for two hours, and we were searching in almost darkness from the start, making conditions difficult.

"The swift work of PD Rey allowed us to take the right direction in our search, and the capability of the rural team's off-road vehicle was crucial in covering rural ground quickly.

"Without this asset, the outcome could have been very grave indeed."