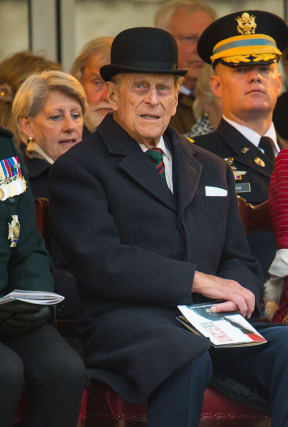 The Duke of Edinburgh will take part in a rare official public engagement, as he transfers his role as Colonel-in-Chief of The Rifles to the Duchess of Cornwall.

But Philip, who retired in 2017, will be nearly 100 miles apart from his daughter-in-law Camilla, as they both carry out ceremonies to mark the occasion.

Amid extreme social distancing, Philip, 99, will be at Windsor Castle in Berkshire, while the duchess will be at Highgrove House in Gloucestershire.

During the Windsor ceremony, Philip will be thanked for his 67 years of support for The Rifles, and their forming and antecedent regiments, by Assistant Colonel Commandant, Major General Tom Copinger-Symes.

And immediately afterwards at Highgrove, Camilla will be welcomed as the new colonel-in-chief by The Rifles’ Colonel Commandant, General Sir Patrick Sanders.

Philip was recently pictured with the Queen at Windsor to mark his 99th birthday in June, and at Princess Beatrice’s wedding on Friday.

He was last seen at a big event when he was a guest at Lady Gabriella Windsor’s wedding in May 2019.

The ceremony later on Wednesday will be Philip’s first engagement in more than a year.

In June 2019, he held an audience when he received General Sir Nicholas Carter who was relinquishing his appointment as Colonel Commandant of The Rifles.

On August 2 2017, he carried out his final official engagement as he retired from public duties.

Camilla was appointed Royal Colonel of 4th Battalion The Rifles in 2007 and will continue to hold this position.

Philip’s links to The Rifles stretches back to 1953 when he was appointed Colonel-in-Chief of The Wiltshire Regiment (Duke of Edinburgh’s).