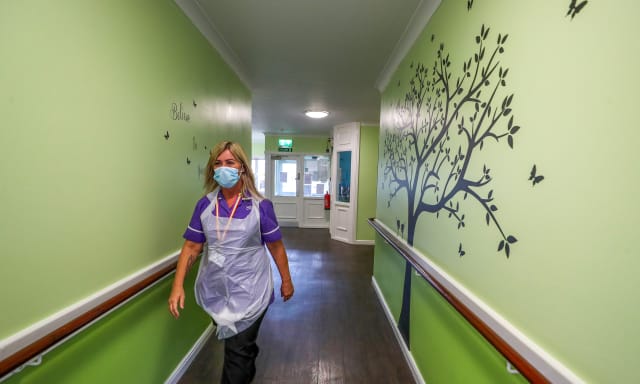 Frontline workers excluded from the public sector pay rise said they feel undervalued and like “our lives don’t matter”.

Almost 900,000 workers are set to benefit from the pay rise, with teachers and doctors seeing the largest increase at 3.1% and 2.8% respectively, according to the Treasury.

However,  some frontline workers — including nurses, social workers, and care home staff — will not benefit from the rise.

One care assistant working in a nursing home, who asked to remain anonymous, said a pay rise would reflect how hard staff had worked during the pandemic.

She said: “We feel like we aren’t good enough, to be honest. We’ve all worked hard and people have picked up extra shifts to help get through the pandemic and we’ve had no thanks for it.

“It has been a stressful and emotional time. Some colleagues have had to speak to a therapist about what has happened and what they’ve had to deal with.”

Health and social care workers have been one of the hardest-hit occupations during the pandemic.

Another care home worker said: “Being excluded from the pay rise, I put my life on the line and it’s like I’m not that important anyway, even though everyone felt like it was necessary to thank and clap for the key workers.

“As much as that was appreciated, it’s not going to pay my bills. So for the fact that I put my life at risk and still went to work, they’re now saying, ‘Nah, you don’t matter’.

“Working those three months was a gamble because every day we got the news that a new person or resident was diagnosed with corona, but we still had to get on with it.”

One unnamed advanced social work practitioner from the West Midlands, who leads a team of social workers, said his industry had been “completely forgotten” throughout the health crisis. Alongside other local authority staff, social workers are not eligible for a pay increase.

He told the PA news agency: “We will be the first to be blamed when things go wrong, but everyone on my team has been working hard throughout the pandemic.

“We have seen a massive uplift in safeguarding cases, things like domestic violence. It’s been a nightmare, so you would expect a little bit of recognition.”

Nurses have not been included in the announcement because they negotiated a separate three-year deal in 2018 that will see their pay rise by 6.5%.

Arlene Bautista, a senior nurse and interim secretary of the Filipino Nurses Association UK, told the PA news agency: “When the pandemic hit, all our annual leave was taken away from us. And rightfully so, it was all hands on deck, we were happy to do it.

“But this is how they repay us?”

Ms Bautista said the nursing pay deal now needs to be renegotiated in light of the pandemic, adding that the current agreement does not cover inflation.

She said the need for a pay rise went beyond nursing staff and should include all healthcare staff who worked on the front lines.

“They can change the deal for Brexit, but not a pay rise for nurses?” she said.