McDonald’s to open restaurants to dine-in customers from Wednesday 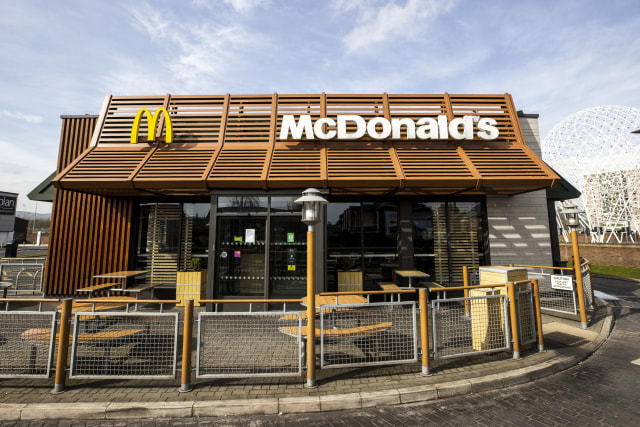 McDonald’s has said it will reopen its restaurants for dine-in customers from Wednesday, in a move which will also allow some restaurants to take part in the Chancellor’s Eat Out to Help Out scheme next month.

The fast food chain said it will reopen dining areas after a successful trial at four restaurant sites.

It said around 700 restaurants across the UK, excluding Wales which has restricted eating in restaurants, will reopen to dine-in customers.

McDonald’s has already reopened its sites across the UK for drive-thru and takeaway sales after they were temporarily shut in March.

Customers will be served their food by table service only, with orders being taken through the McDonald’s app or at tills and kiosks, it said.

In a statement, the company said: “Social distancing measures will be in place and, to prevent congestion, the restaurant will carefully manage the number of customers inside.

“When arriving, customers will be asked to use the hand sanitiser provided and follow the safety measures laid out in restaurants to help keep them, other customers and restaurant teams safe.”

Customers who eat in will also be asked to leave their contact details by using their smartphone.

It added that the move will enable “some restaurants” to take part in the Chancellor’s Eat Out to Help Out scheme, halving dine-in bills by up to £10 per person on Mondays, Tuesdays and Wednesdays in August.

Last week, McDonald’s said it has also recommended that franchisees cut the price of popular items and meal deals after the Government slashed VAT on hot meals from 20% to 5% for the next six months.

It said it intends to reduce the price of Happy Meals by 30p and breakfast meals by 50p, with price cuts also recommended for Big Macs, Quarter Pounders and McNuggets.