Johnson warns of ‘bumpy months ahead’ as Cabinet meets 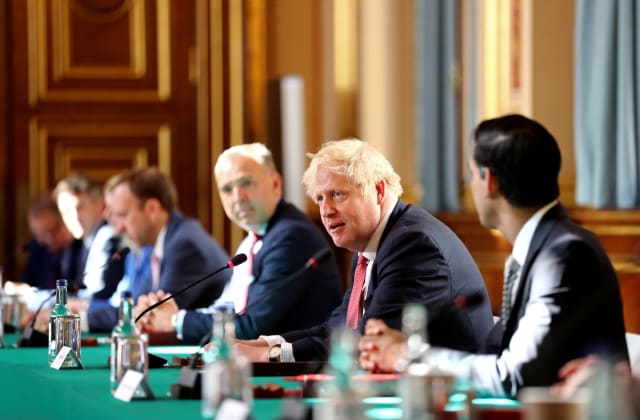 The UK faces more “bumpy months” as it copes with the impact of coronavirus on the nation’s health and finances, Boris Johnson warned.

As the Cabinet gathered for a face-to-face meeting for the first time since March, the Prime Minister stressed the need to “get our economy moving”.

The symbolic meeting is an attempt by Downing Street to show that it is safe to return to workplaces.

But in a sign of the changes forced on the country by the virus, the meeting took place in the Foreign Office’s grand Locarno Suite rather than the smaller Cabinet Room in 10 Downing Street.

Ministers were required to remain at least a metre apart, there was hand sanitiser available on entry and exit and they were all given individual water bottles rather than sharing jugs.

Opening the meeting, Mr Johnson said there will be “difficult months ahead for our people and our country, but no-one will be without hope.

“We will build back better and come through this crisis more strongly than ever before,” the Prime Minister said.

“And for the next few months we have to strike a balance – we have to continue to push down on this virus and keep it under control in the heroic way the British people have managed so far.

“But we must also cautiously, while observing the rules on social distancing, get our economy moving again and get our people back into work.”

The meeting came after a study suggested a Covid-19 vaccine being developed by the University of Oxford was safe and induces an immune reaction, which was branded “encouraging” by the scientific community.

Deputy Chief Medical Officer Professor Jonathan Van-Tam responded in The Sun, saying he was “cautiously optimistic that by late next spring there will be several vaccines that will have made it. And my confidence is increasing”.

Health Secretary Matt Hancock, one of the ministers at the Cabinet meeting, later praised the work of British health officials, saying they had “played a blinder”, and claiming the virus was “on the back foot”.

Meanwhile, Chancellor Rishi Sunak announced public sector workers on the frontline of the pandemic would receive a pay rise.

Almost 900,000 workers including doctors, teachers and police officers will be given an above-inflation pay rise following a testing few months since Covid-19 hit the UK.

But as he launched a comprehensive spending review, he also warned that there would have to be restraint in future public sector pay rises.