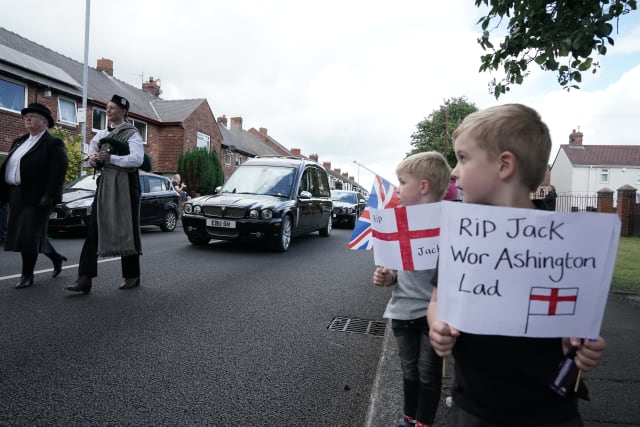 The grandchildren of World Cup winner Jack Charlton have paid tribute to “a proud Englishman, a proud northerner and a proud honorary Irishman” at his funeral service.

The eulogy to the football great came at a private family service which followed remarkable scenes in his home town of Ashington, Northumberland, where thousands lined the streets to pay respect to “Wor Jack”.

The former mining community was where he and his brother Sir Bobby honed their skills years before they lifted the Jules Rimet Trophy, and where they spent many hours in the back lane behind Beatrice Street.

Sadly, the family said Sir Bobby was not well enough to attend the service at Newcastle Crematorium.

Charlton’s coffin was draped with scarves from England, Ireland, Leeds and Newcastle United.

In their tribute, grandchildren Emma, Kate and Tom Wilkinson said: “The footballer, the friend, the family man we all knew was forged in Ashington – during a happy childhood with the parents and three brothers he always loved dearly.

“As they whiled away hours kicking a ball around Hirst Park, Grandad could never have imagined how remarkable his life would go on to be.”

They spoke of his record-breaking career with Leeds United, his time coinciding with the West Yorkshire side’s most successful years.

The grandchildren said that he had never expected to be called up for England – his first cap came shortly before he was 30.

Their eulogy continued: “And on that famous day in July 1966, as the final whistle blew on English football’s most historic moment, he dropped to his knees, head in hands.

“Many have often wondered what he was thinking – was it pure elation? Was it the gravity of the achievement?

“Was it relief that the hopes of a nation had been realised? Well he always told us he was just bloody knackered.”

He turned to management, eventually sealing his reputation with tremendous success as Republic of Ireland boss.

His grandchildren said: “Ireland was a great fit for Grandad, the people, the ‘craic’, the salmon fishing, the Guinness – and a bit of football thrown in.

“We’ve been overwhelmed with kind messages from Ireland – one that really stuck out said Grandad ‘did the near-impossible and transcended politics – some called him the English Irishman, but why reference the divides and mountains he so affably rose above? Simply, he was both a man and the man’.”

They added: “His achievements in England and Ireland brought him great recognition, but he always had his feet firmly on the ground – in fact he found fame endearingly novel and he would have been really chuffed with all the nice things people have been saying about him in the past week or so.

“He was rightly proud of all his footballing achievements and they helped shape the person he was, but they are just parts of a life full of love, generosity, and a lot of laughs.”

The family was touched by many kind messages they have received from fans, saying: “It’s clear that the many fleeting moments of kindness he showed to strangers had a lasting impact, and we’re extremely proud to be able to say that the man everyone met is the man we knew.

“A man who struck the balance so perfectly between football icon, fan favourite and loving family man.”

After the service, the family added: “We’d like to thank people who turned out on the streets of Ashington, we were all overwhelmed and he would have been thrilled by the outpouring of kindness.”