Hundreds to pay their respects ahead of Jack Charlton’s funeral 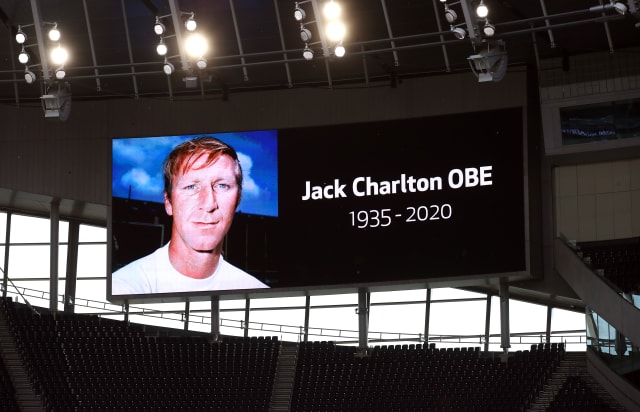 Hundreds of people will line the streets of Ashington to pay their respects to World Cup winning hero and proud North Countryman Jack Charlton.

The funeral cortege will leave his home near Newcastle and slowly pass through the town where he and his brother Sir Bobby spent their formative years, spending countless hours in back lanes and parks, honing their skills which took them to the top of the game.

Charlton, who went on to become a successful manager most notably with the Republic of Ireland, died earlier this month aged 85.

Tributes came in from across the football world for the one-club Leeds United legend, famed for his uncompromising defensive work.

He went on to be revered in Middlesbrough after guiding the club into the old first division as champions, but it was leading the Republic of Ireland which sealed his managerial reputation as one of the greats.

Irish fans took Big Jack to their hearts, and the feeling was mutual, as he led the country to two successful World Cup campaigns in 1990 and 1994.

Charlton was the eldest son of miner Bob and his wife Cissie, who went on to have three more boys.

He followed his father at the pit for a brief spell before leaving Northumberland to join the Leeds United ground staff aged 15.

He stayed there for a remarkable 23 years, a spell broken only by National Service, playing a major part in the club turning from also-rans into a major European force.

He was almost aged 30 when he made his England debut, but the late developer turned good at the just the right time, and was one of the Wembley heroes on that famous day in 1966.

Outside football, Charlton loved his country pursuits and was a keen fisherman.

He remained a hugely popular figure in his retirement, with many fans sharing stories of how he always had time for supporters when he was out and about in his beloved North East.

He is survived by wife Pat and their three children, John, Deborah and Peter.

Charlton had been diagnosed with lymphoma in the last year and was also battling dementia.

After his death, his family said in a statement: “Jack died peacefully on Friday, July 10 at the age of 85. He was at home in Northumberland, with his family by his side.

“As well as a friend to many, he was a much-adored husband, father, grandfather and great-grandfather.

“We cannot express how proud we are of the extraordinary life he led and the pleasure he brought to so many people in different countries and from all walks of life.

“He was a thoroughly honest, kind, funny and genuine man who always had time for people.

“His loss will leave a huge hole in all our lives but we are thankful for a lifetime of happy memories.”

A private family service will be held in Newcastle with a limited number of mourners due to the Covid-19 restrictions.