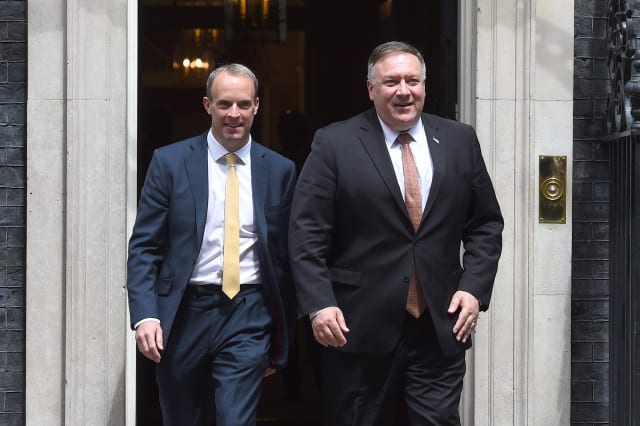 The mother of the teenage motorcyclist who was killed in a collision with a US diplomat’s wife accused Foreign Secretary Dominic Raab of being a “lost child in an adult’s world” as he greeted the US Secretary of State on Tuesday.

Charlotte Charles appeared in person at the gates of Downing Street to watch the arrival of Mike Pompeo and said that “words are not enough anymore”.

Ms Charles, who was accompanied by her partner Bruce and lawyer Radd Seiger, said that she had come “to show Mr Pompeo and Mr Raab and Mr (Boris) Johnson that I’m not just going to stick on my TV and watch them at home.

“It’s really important that we come here and let them know that Harry was important and they need to realise that,” she told the PA news agency.

“So I’m not going to stay at home.

“I intend to make sure that they are aware that we’ve made the effort to be here to try to communicate with them.”

A previous request for the extradition of Anne Sacoolas was rejected by the US in January.

Mr Pompeo wrote on Twitter that he was looking forward to the meetings with Mr Johnson and Mr Raab to “address our shared security challenges”.

Ms Charles appealed to the government at the weekend to make her son the “top priority” during the visit and said she was tired of assurances.

“We’ve been assured by Dominic Raab’s team…that Harry is number one on the agenda,” she said.

“Well prove that to us then.

“Tell us what they’re going to do.

“Words are not enough anymore.

“There are plenty of things (Mr Raab) could do, we need proof of what he’s going to do.

“He looks defeatist, he looks like a little lost child in an adult’s world.

“Stand up for us, we are UK citizens.”

Mr Seiger added: “There are plenty of things (the Government) can do.

“They could suspend the extradition treaty between the United States and the United Kingdom much like they did with Hong Kong yesterday.”

It is understood that China will be high on the agenda of the meeting between Mr Pompeo and the Prime Minister.

Ahead of the visit, the Chinese Government warned that Britain would “bear the consequence” of suspending the treaty.

“We’ve been through a number of months now of (Mr Raab) saying to us that he raises (The Dunn case) every once in a while with the United States administration,” continued Mr Seiger.

“We understand that there are hugely important global issues that need to be discussed but there are none more important than the lives of our children and the human rights of this family that are entitled to justice.

“That has to come first.”