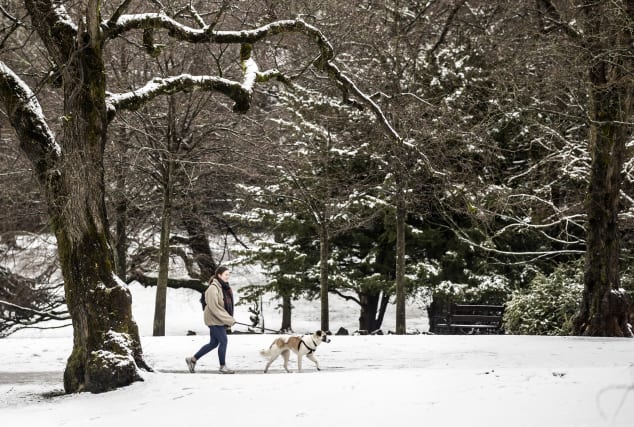 Coronavirus may be more severe in colder months than warmer ones, and dry indoor air may encourage its spread, new research suggests.

Severe Covid-19 outcomes decreased as the pandemic progressed from winter to the warmer months, analysis indicates.

Experts warn that their findings paint a grim picture for the colder weather, when it is thought the disease may re-emerge.

They mapped this against local temperature and estimated indoor humidity and found that severe outcomes – being taken to hospital, admittance to ICU or the need for ventilation – dropped in most European countries over the course of the pandemic, covering the transition from winter to early summer.

The study, which has not been peer-reviewed, suggests there was a corresponding decrease in the rate of deaths from the disease.

There was roughly a 15% drop in mortality for every one degree Celsius rise in temperature, the King’s College London researchers say.

By contrast, the severity of symptoms and mortality rate remained constant in China during the first wave of the pandemic, which occurred solely throughout the winter.

The study also looked at data from more than 37,000 UK users of the Covid Symptom Study app reporting symptoms consistent with Covid-19.

It showed a similar decrease in the severity of reported symptoms from March through May as UK temperatures rose.

According to the researchers, the changes were too large to be explained by improvements in treatment of the disease, patient age or hospitals becoming overwhelmed during this time.

This suggests there is a seasonal influence on the virus.

Although the virus can clearly spread in hot, humid countries in East Asia, it is notable that the severity and mortality from the disease have been lower than in Europe and other more temperate climates, the paper suggests.

The researchers suggest indoor heating during the winter months may also contribute to the spread of the disease by drying out the protective mucus barrier within the nose and airways, making viral infection easier.

Dr Gordan Lauc, professor of biochemistry and molecular biology at the University of Zagreb and honorary visiting professor at King’s College London, is senior author of the study.

He said: “Our findings point to a role for seasonality in the transmission and severity of Covid-19, and also argue for increased humidity and hydration as a way to combat the virus.

“This paints a grim picture for the next winter in Europe when more severe ‘winter’ Covid-19 is expected to return – something we are currently observing in the southern hemisphere.”

Professor Tim Spector from King’s College London, added: “This study highlights the importance of gathering long-term data about the incidence, symptoms and progression of Covid-19 from as many people as possible.

“By understanding the many factors that contribute to the severity and spread of the disease, we can implement effective measures to control it over the coming months.”