Charles praises GP surgeries for their ‘heroic work’ during pandemic 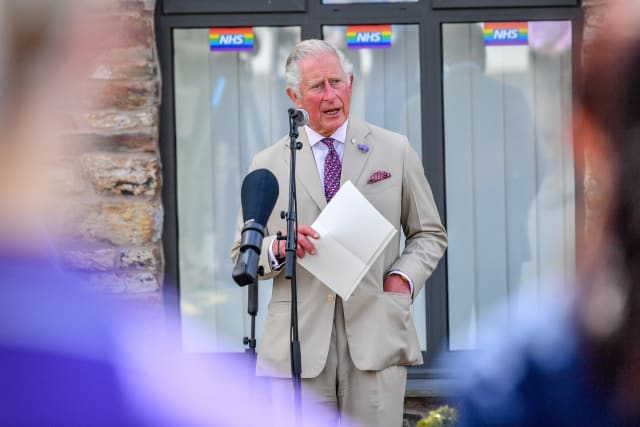 The Prince of Wales has praised GPs and their staff for their “heroic work” during the pandemic as he visited a leading general practice surgery in Cornwall.

Charles and Camilla travelled to St Austell Healthcare, seen as a model for future GP surgeries, to learn how staff dealt with Covid-19 and said the nation owed them an “immense debt of gratitude”.

The heir to the throne also highlighted its pioneering work with social prescription where patients’ needs are addressed holistically by prescribing activities like gardening or cooking.

After meeting staff in the open air Charles said: “We have heard a lot recently about the heroic work being done in hospitals during this pandemic crisis, but I believe it is now also time to thank those of you in general practice and primary care for the heroic work that you have all been doing and performing within your communities.

“I must say, I have nothing but immense praise for doctors and nurses, but what strikes me most is how this vital work is part of a vast team effort and I am so grateful for this opportunity to meet with those other members of the team.

“The receptionist, practice manager, allied health professional, practitioner in mental health, social worker, volunteer and those working in the voluntary sector and, of course, those working in care and nursing homes.

“This nation owes each and every one of you, here and everywhere else, an immense debt of gratitude.”

Earlier Camilla served up a treat for volunteers, who have dished out thousands of hot meals during lockdown, when she visited Treverbyn Community Hall, in St Austell with Charles.

The royal couple helped out at the Hive project which has cooked around 100,000 meals since March.

Camilla, 73, dished up two portions of rogan josh curry with project lead Brian Honey-Morgan and joked: “They are not allowed seconds.

“But I hope somebody enjoys that.”

She also praised their efforts adding: “Thanks so much for all you’ve done and volunteering. People are brilliant.”

The prince and duchess were also told about initiatives run by community groups during the pandemic, including the Phone A Friend scheme, and met primary school pupils who had recently returned to class.

The projects are run by the Cornwall Community Foundation, which the duchess supports as patron and which received £1.5 million from Charles’ Duchy of Cornwall Benevolent Fund.

The prince told volunteers “I’m so glad it helped” and Mr Honey-Morgan revealed chefs had secured food unwanted by supermarkets to create their meals.

Charles said: “It is very good stuff. Thank you for your fantastic work.

“It is such a marvellous community.”

As they left the prince and duchess were greeted by primary school children from The Treverbyn Academy, which has 207 pupils aged between four and eleven.

The youngsters waved homemade rainbow flags and most had been home schooled during the pandemic.

The duchess said: “My children will be quite glad when it’s over.”