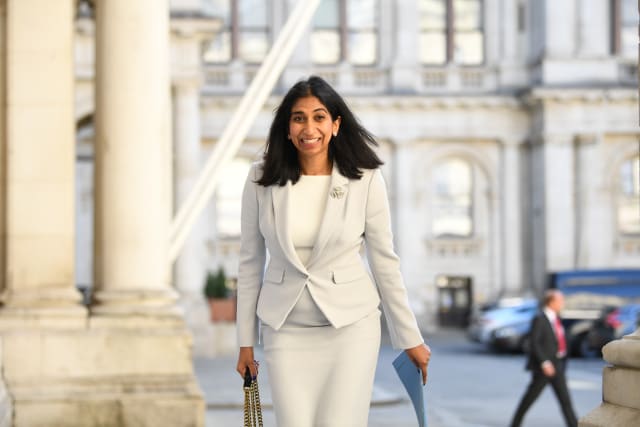 The Attorney General has denied her tweet in support of Dominic Cummings' trip to Durham during lockdown amounted to political interference in due process.

Speaking at her first appearance before the Commons Justice Committee, Suella Braverman insisted her comment did not amount to a legal view on the row caused when Mr Cummings moved his family 260 miles from London to Durham to stay on his parents' farm while strict travel restrictions were in place during the lockdown.

It came as she told MPs the current Covid-19 regulations were not confusing or "hard to follow".

Mr Cummings' actions were widely criticised but he was defended by the Prime Minister and several key Government figures, including the Attorney General.

On May 23, she tweeted: "Protecting one's family is what any good parent does. The @10DowningStreet statement clarifies the situation and it is wholly inappropriate to politicise it."

When asked by MPs whether her support was inappropriate on Tuesday, she said she did not regret the tweet, adding: "I don't think there is any question I offered a legal opinion. I treat the independence – operationally and in other ways – of the Crown Prosecution Service (CPS) extremely seriously.

"There's no question of my having interfered with or influenced any decision made by the CPS or the police on that matter."

Protecting one's family is what any good parent does. The @10DowningStreet statement clarifies the situation and it is wholly inappropriate to politicise it. https://t.co/SdI5A1Dn2z

Ms Braverman added: "It was in no way intended to be a legal view and I don't think it comprised a legal view, so there's not much more I can say other than repeating myself on this matter."

The Attorney General said she felt people were trying to "unduly politicise" the incident and felt her tweet would not have affected anyone "in full knowledge of the facts.

She said: "I really have a lot of confidence in the expertise and the judgement of those on the front line who are dealing with these matters and are in full knowledge of the facts, whether that is the police or the prosecutors.

"I don't think they would be influenced by a tweet that was in the form that I issued."

After being asked whether the Covid-19 regulations were too complex, Ms Braverman told the committee: "I think you underestimate the ability of the British people. I think there has been remarkable level of compliance and following of the rules."

She added: "I think the public information campaign in various media has been very effective at informing people and that's borne out in the figures and the data – generally there has been very, very good compliance and following of the rules.

"Yes of course, there will be (those) who have questions, there will obviously be some concerns, but on the whole the guidance has been pretty clear."

After the hearing, the Liberal Democrat's justice spokeswoman Daisy Cooper said: "The public must be able to have confidence that the Attorney General is providing honest and impartial legal advice to the Government.

"The Attorney General undermined public confidence by wading into the Cummings scandal for no reason other than to please No 10. It's appalling that she still doesn't seem to understand why what she did was wrong."