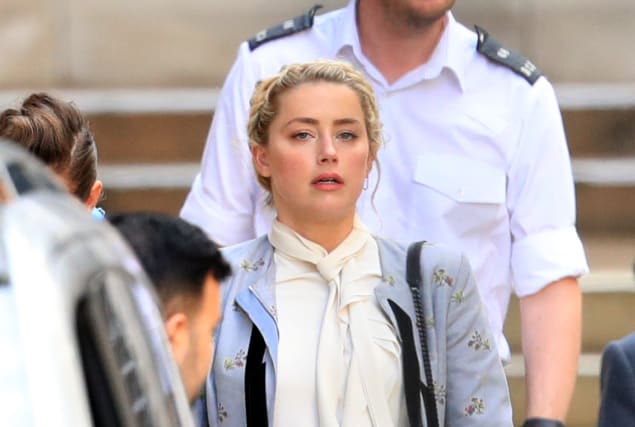 Actor James Franco allegedly questioned Amber Heard about her face, asking: “What the f***?”, when they met the day after an incident in which the actress claims Johnny Depp was violent towards her.

Ms Heard claimed Mr Franco asked her: “Oh my god, what happened to you?”, as they took a lift to her penthouse in Los Angeles’ Eastern Columbia Building late on May 22, 2016.

The 34-year-old actress alleges that on May 21, 2016, Mr Depp threw her mobile phone at her, hitting her in the face, during a row at the couple’s apartment – which Mr Depp denies.

As Ms Heard gave evidence on the 11th day of Mr Depp’s libel action against The Sun newspaper, the court was played CCTV footage of her travelling downstairs in the lift at the Eastern Columbia Building on May 22 2016 at about 11pm, before travelling back upstairs shortly after with Mr Franco.

Ms Heard confirmed that the man in the footage was Mr Franco.

Eleanor Laws QC, representing Johnny Depp, asked: “Are you trying to avoid being seen by the camera there?”

Ms Heard replied: “We were talking. He was saying to me ‘oh my god, what happened to you?’

Ms Laws asked: “That’s not secretive talking on that camera?”

Asked about what time Ms Heard collected Mr Franco, 42, from downstairs, Ms Heard confirmed it was after 11pm, and said: “In those days, I didn’t sleep much at night.”

The footage shows Ms Heard, in a long coat, get into the lift, followed by Mr Franco, who is wearing a baseball cap and backpack.

She moves to stand next to him and they stand close together, appearing to talk.

Ms Heard and Mr Franco starred together in the 2015 film The Adderall Diaries.