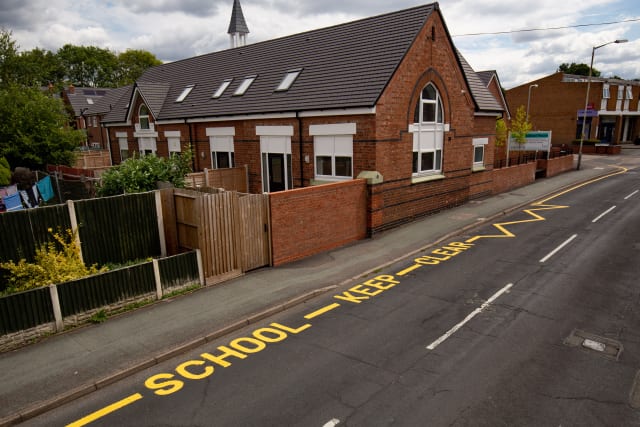 Council contractors have been left red-faced after repainting school road markings, 10 years after lessons stopped on the site.

The old Tettenhall Wood School in Wolverhampton, West Midlands, relocated in 2010, and was replaced by a housing development.

But in recent days the fading School, Keep Clear markings directly outside what were the old front gates in School Road, have been replaced with a fresh coat of bright yellow paint.

Wolverhampton City Council said “mistakes do happen” and would be arranging for the markings’ swift removal.

At the site, signage clearly visible from the roadside, reads “The Old School House” is now “a selection of shared ownership homes”, made up of two and four-bed properties.

A Wolverhampton City Council spokesman said: “We maintain around 800 kilometres (497 miles) of roads across the city, and occasionally mistakes do happen.

“Clearly this re-marking, which was carried out as part of routine maintenance work in the area, was completed in error and we will be reviewing our procedures.

“In this instance, the markings were refreshed by our contractors and we are arranging for them to be removed as soon as possible.”