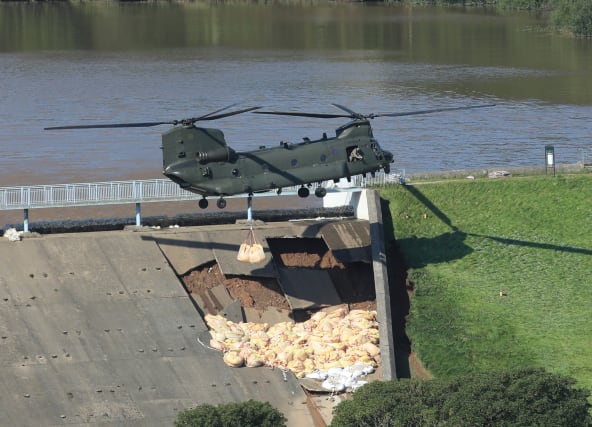 The damaged dam in Whaley Bridge is now “totally secure against any extreme weather event” following restoration work, the Canal and River Trust has said.

More than 1,500 people were evacuated from the Derbyshire town from August 1 last year due to fears that the dam wall at Toddbrook Reservoir would collapse after heavy rain.

Although temporary restoration work is close to completion, the permanent reconstruction project will take around three years and cost more than £10 million, the trust said.

Footpaths around the reservoir are set to be reopened next month until spring 2021, when permanent repairs are expected to start.

A Government report on Toddbrook concluded the dam partially collapsed due to “poor design and intermittent maintenance”.

The Canal and River Trust said new features on the dam’s spillway mean the structure is now secure against extreme weather events, and will remain in place until the end of the permanent reconstruction project.

Detailing the specifics of the restoration work, the trust said the dam’s waterproof clay core has been made more effective by the installation of a concrete “cut-off beam” and an enhanced crest wall along the top of the dam.

The Canal and River Trust North West regional director, Daniel Greenhalgh, said: “We are delighted to have completed this first phase in the restoration of Toddbrook Reservoir.

“We have had to cope with some challenging operating conditions but we can confirm the dam spillway is totally secure against any extreme weather event.

“Over the last year, there has been considerable work done to prepare for the permanent restoration of Toddbrook.

“We are currently examining a range of potential repair options and the views of local residents are a key part of the decision-making process.

“We are planning to host a public consultation event in late summer and then confirm the preferred option in the autumn.

“Once the temporary works are complete in the next few weeks, the construction site restrictions will be greatly reduced, and we are delighted this will allow us temporarily to open up some of the footpaths at the reservoir until work begins again next spring.”