US Secretary Pompeo arrives in UK for talks with Boris Johnson 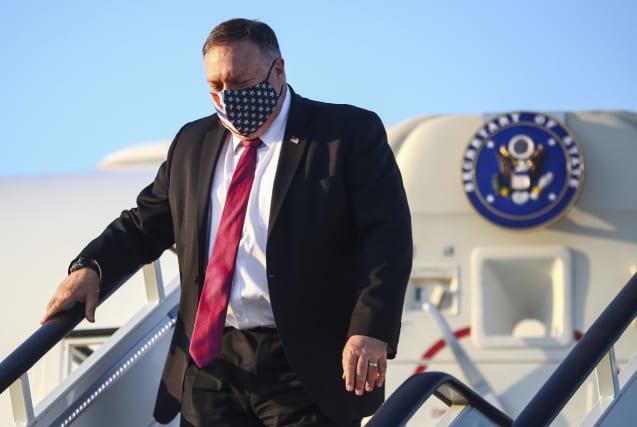 US Secretary of State Mike Pompeo has arrived in the UK ahead of meetings with the Prime Minister and the Foreign Secretary.

Mr Pompeo was pictured disembarking while wearing a face covering decorated with the stars and stripes of the US flag after his plane touched down at an unnamed airport in London on Monday evening.

China is expected to be high on the agenda when Mr Pompeo meets Boris Johnson during a Downing Street summit on Tuesday, while a meeting with Foreign Secretary Dominic Raab is set to follow.

Mr Pompeo wrote on Twitter: “Great to be back in London to reaffirm the special relationship we share with our closest ally.

“Looking forward to meeting with Boris Johnson and Dominic Raab as we tackle our most pressing global issues in combating Covid-19 and addressing our shared security challenges.”

The arrival of the former US army officer comes after the UK suspended its extradition treaty with Hong Kong and slapped an arms embargo on the territory in response to China’s national security law.

Foreign Secretary Dominic Raab said the measures were a “reasonable and proportionate” response to the law imposed by Beijing – a law Washington has joined in criticising.

The frosty relations between the US and China led to President Donald Trump’s administration imposing sanctions on Huawei over security concerns – a decision that played a major part in the UK Government’s move last week to demand that the Chinese technology giant’s equipment is stripped out of the country’s burgeoning 5G network by 2027.

Backbench Tories, including Commons Liaison Committee chairman Sir Bernard Jenkin, have been pressing for a tougher approach to Beijing, particularly in relation to its role in building nuclear power plants in Britain.

The U-turn on Huawei – a reversal of the announcement in January allowing it a limited 5G role – has left China aggrieved.

The Chinese ambassador to the UK, Liu Xiaoming criticised the Government’s approach in a combative BBC interview on Sunday, denouncing Britain for “dancing to the tune” of the US and accusing Western countries of trying to foment a “new cold war” with China.

But on Monday, Mr Raab took further action when he told MPs the extradition treaty with Hong Kong was being suspended “immediately and indefinitely” because of concerns the security legislation could allow cases to be transferred to mainland China.

An arms embargo with mainland China has been in place since 1989 and that will now be extended to Hong Kong because of the extra powers Beijing now has for the internal security of the territory.

In an interview before Mr Raab’s announcement, the Prime Minister had promised to strike a balance in his approach to Beijing, resisting pressure from China hawks to take a hardline stance.

“I’m not going to be pushed into a position of becoming a knee-jerk Sinophobe on every issue, somebody who is automatically anti-China,” he said.

“But we do have serious concerns.”

Shadow foreign secretary Lisa Nandy suggested the Government could take steps to bar Chinese Communist Party officials from the UK and called for a “new era” in terms of the Britain’s relationship with the country.