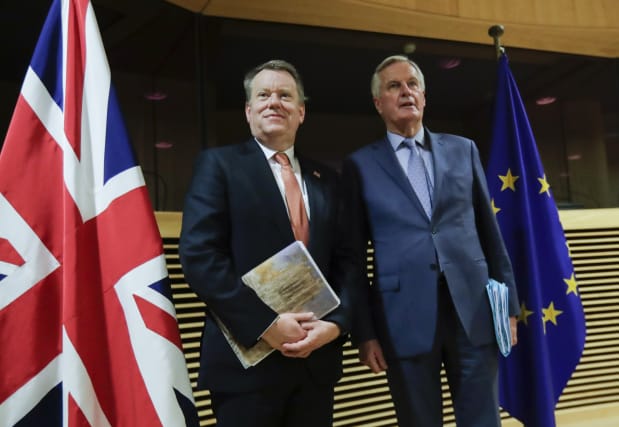 Brussels and UK negotiators will kick-start the formal aspect of talks on Tuesday in a bid to secure a post-Brexit trade deal following a working dinner between the lead figures in central London.

The European Union's chief negotiator Michel Barnier has returned to London, having previously been in the UK for fringe talks only a fortnight ago, for the latest round of discussions as the two sides seek an end to the deadlock.

Mr Barnier tweeted that he and his UK counterpart David Frost, the Prime Minister's Europe adviser, shared a poignant moment as they paused together in front of a war memorial following dinner on Monday in Westminster.

He said: "At the occasion of the working dinner with my counterpart David Frost at Carlton Gardens, a brief moment remembering our shared European history."

There continue to be a number of key sticking points in the way of agreeing a deal before the transition period ends in January.

The points of dispute – the "level playing field" of measures designed to ensure fair competition between the UK and EU, fisheries and the governance of any deal – will be on the agenda in Tuesday's sessions.

Ahead of the talks, Downing Street acknowledged significant differences remained between the two sides.

"In terms of the discussions that we have been having throughout the intensified process, they have continued to be constructive but significant differences still remain on a number of important issues," the Prime Minister's official spokesman said.

"Our position on our sovereignty, laws and fisheries is clear – we will not give up our rights as an independent state.

"We will continue to engage constructively with the EU on these key issues and will work hard to reach the broad outline of an agreement.

"But as we have been clear all along, we are not asking for a special, bespoke or unique deal."

The Prime Minister has previously said there was "no reason why we shouldn't get this done in July" but that now looks a distant prospect, with No 10 instead saying talks should not continue into the autumn.

The UK has ruled out extending the transition period, meaning the current arrangements with the EU will expire at the end of the year.

The spokesman said: "We don't want talks to drag on into the autumn and want to make progress as quickly as possible in order to give certainty and clarity to business."