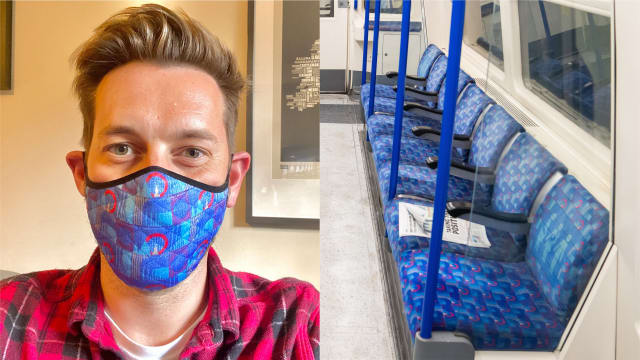 A railway expert has made face masks to match the “iconic” seat patterns on London’s transport network.

Historian and broadcaster Tim Dunn revealed the moquette-inspired designs and hopes they will help encourage people to wear the coverings – which became mandatory for public transport users on June 15.

Mr Dunn took inspiration from the fixtures he encounters on his usual journeys by Tube and bus in the capital.

“The blue, grey and red one is my fave – known as the ‘Barman’ design, it’s seen on Northern, Central, and Jubilee lines,” he said.

Other designs Mr Dunn made include a black background with green, yellow, purple and pink rectangles.

The pattern matches the colours of the lines it is used on, the District, Circle, Metropolitan and Hammersmith & City lines.

Mr Dunn said making the masks was “really simple”, uploading the patterns to a website for customised masks, and he intends to make more soon.

He sported one of the creations, an orange and brown design seen on the London Overground line, in a video recorded for the Department of Transport in support of its face coverings policy.

“It’s very important that people wear face coverings on public transport – unless they’re exempt – so that we can all travel safely this summer together,” Mr Dunn said.

“Some people have strong feelings against them, but it’s a minor inconvenience for most people, and it really isn’t forever – I think it’s for the good of us all.”

Young children and people with disabilities and breathing difficulties do not need to wear a mask on public transport.