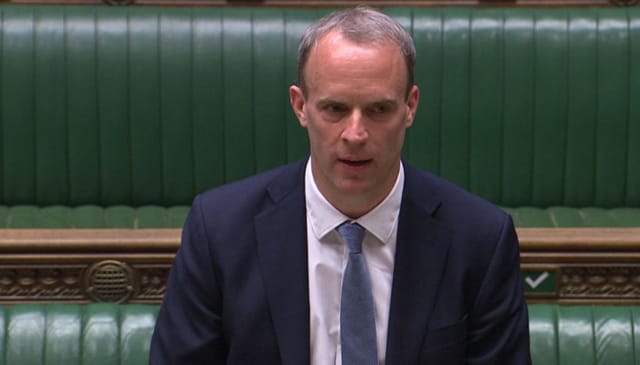 The UK has suspended its extradition treaty with Hong Kong and slapped an arms embargo on the territory in response to China’s national security law.

Foreign Secretary Dominic Raab said the measures were a “reasonable and proportionate” response to the law imposed by Beijing.

He told MPs the extradition treaty was being suspended “immediately and indefinitely” because of concerns the security legislation could allow cases to be transferred to mainland China.

An arms embargo with mainland China has been in place since 1989 and that will now be extended to Hong Kong because of the extra powers Beijing now has for the internal security of the territory.

Mr Raab said: “The extension of this embargo will mean there will be no exports from the UK to Hong Kong of potentially lethal weapons, their components or ammunition.

“It will also mean a ban on the export of any equipment not already banned which might be used for internal repression such as shackles, intercept equipment, firearms and smoke grenades.”

Setting out the reasons behind the extradition changes, the Foreign Secretary said the national security law had “significantly changed key assumptions” about the operation of the system.