Michelle O’Neill: NI should protect against spread of Covid-19 from GB 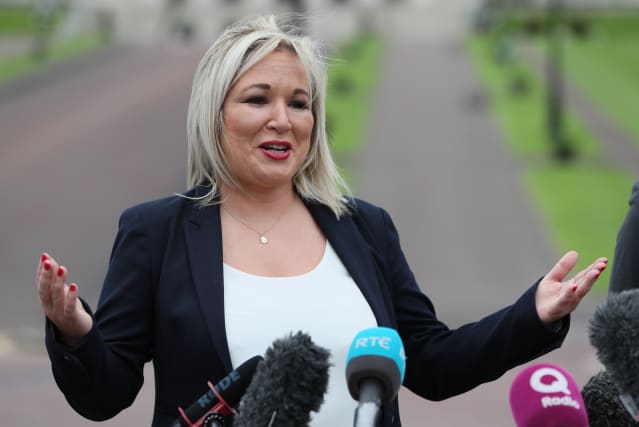 British visitors are expected to quarantine for 14 days when they arrive in the Republic of Ireland.

First Minister Arlene Foster wants to preserve free movement for the sake of business and family life but her powersharing deputy, Michelle O’Neill, urged the alignment of rules north and south of the Irish border.

The Sinn Fein vice-president said: “It is my view that, given that this is where the biggest risk comes from, we need to act on that.”

Ms O’Neill said she intended to discuss the matter with fellow Stormont ministers and the island of Ireland needed to act as one unit.

She added: “The community transmission there is so much higher.

“Probably the biggest risk to us is travel from Britain. It is something I am concerned about.”

She held talks with fellow devolved leaders in Scotland and Wales on Wednesday.

The number of deaths recorded in Northern Ireland remains at 556, the Department of Health reported on Monday.

The infection threat has been driven down over recent weeks.

DUP leader Mrs Foster was asked whether a recent call by Sinn Fein president Mary Lou McDonald for all people entering the island of Ireland to self-quarantine indicated a difference of opinion at the heart of the powersharing executive.

“The Republic of Ireland has decided to go on a different route and they don’t respect the common travel area, that’s a matter for them.

“But I think it is important for business, for family life, for social life, for political life, let’s face it, as well, that we continue to have the UK working together and making sure we can have that travel across the United Kingdom.”

There are around 60 countries on Northern Ireland’s safe travel list, but there are expected to be fewer on the Irish Republic’s list when it is published.

The list had been due to be finalised at a cabinet meeting on Monday, but it was postponed late on Sunday due to the Taoiseach’s need to remain in Brussels for an extended EU summit.

Only countries that have a coronavirus infection rate the same or lower than Ireland will be included on the list.

That means Great Britain and the US are set to be excluded, as potentially are popular holiday destinations such as France, Spain and Portugal.

People crossing the border from Northern Ireland are not subject to restrictions on their movement.

The DUP leader was asked about the different approaches on both sides of the border.

“We have always had differences as we work through Covid but I think the important thing is we’ve always communicated with each other, we’ve always understood why those decisions have been taken,” she said.

“The decisions are taken around our travel regulations on the advice from the chief medical officer (Dr Michael McBride) working in the ‘four nations’ approach across the UK, so there’s an understanding as to why that is the case.”