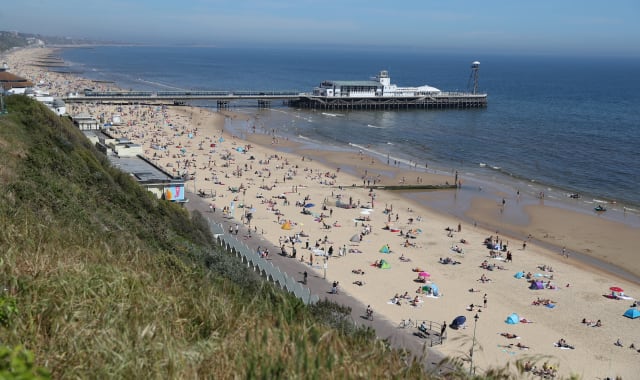 A large blaze has broken out on cliffs in Bournemouth after a beach hut caught fire, police said.

People have been told to stay away from the area, with residents advised to keep doors and windows closed.

The fire, on West Undercliff, is affecting three beach huts and approximately 100 square meters of heath on the cliff face.

A spokeswoman said: "We were called to the scene at 3.51pm and have fire crews in attendance from Redhill Park, Springbourne, Westbourne and Christchurch, together with the aerial appliance from Westbourne.

"The fire is causing significant smoke across the promenade and across West Hill Road.

"People are asked to stay away from the area, and to keep doors and windows closed as a precaution."

Videos and pictures posted on social media showed fire up the cliff face, with plumes of black smoke visible from a distance.

Dorset Police tweeted: "Please avoid the area of the West Cliff lift on Bournemouth's West Cliff following a beach hut fire, which has spread to nearby beach huts and is moving up the cliff.

"A cordon is in place for the safety of members of the public.

"We are assisting with the cordon."