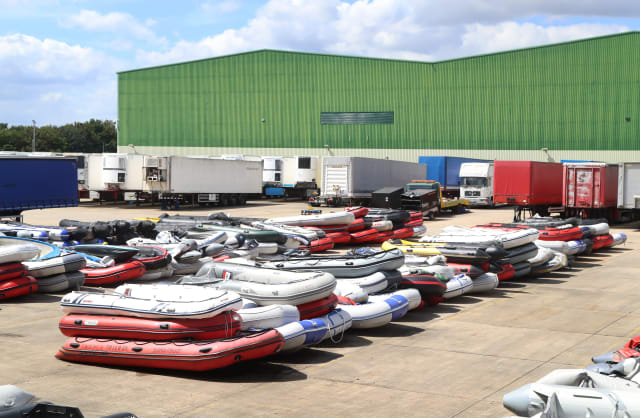 Hundreds of boats believed to have been used by migrants to cross the Channel are being stored at a warehouse in Dover.

Pictures show the discarded dinghies and rowing boats, which were discovered piled on top of one another at a warehouse storage facility on an industrial estate in the Whitfield area of the Kent port town, on Monday.

They are thought to be those seized by the authorities after being intercepted by Border Force vessels as migrants attempt the dangerous crossing from the French coast to the UK.

It is unclear who runs the facility. The Home Office is yet to respond to requests for further information.

At least 2,700 migrants have crossed to the UK so far this year, analysis by the PA news agency shows.

The journey across the world's busiest shipping lanes has been attempted in all manner of small boats, from inflatable dinghies to kayaks.

Last week more than 270 people made the crossing, with 125 on Friday alone.

The news comes as Home Secretary Priti Patel told MPs the UK Government was locked in a row with France over differing "interpretations" of maritime law in efforts to tackle the crossings crisis.

She sought to level blame at her French counterparts as she told the Commons Home Affairs Committee of the "unacceptable" number of crossings taking place.

Her comments came just days after she hailed a "new operational approach" to dealing with crossings, after meeting French interior minister Gerald Darmanin and agreeing to set up a Franco-British intelligence cell.

Earlier this month Ms Patel told PA there was no new target date set for when illegal migrant crossings should become an "infrequent phenomenon".

Less than a year ago she vowed "urgent action" on the dangerous crossings, aiming for them to be virtually eradicated by spring this year.

Tony Smith, the former head of UK Border Force, told PA the only way to stop the crossings was for the UK and France to agree a deal whereby migrants picked up in the Channel would be returned to France.

But charities have repeatedly insisted the only way to tackle the crossings is by committing to providing migrants with safe, legal routes of passage for those seeking sanctuary in the UK.

The Home Office has said migrants should be claiming asylum in the first safe European country they arrive in.