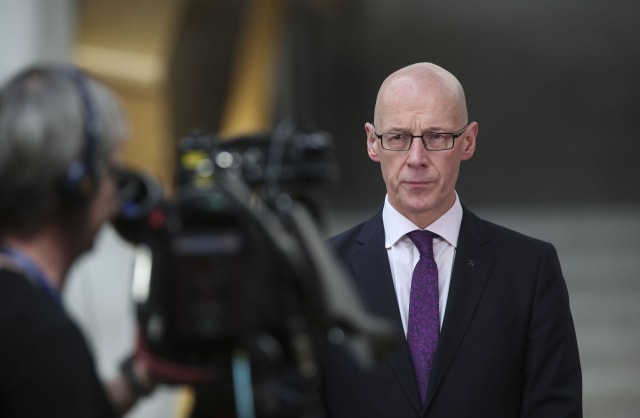 Scotland’s Deputy First Minister has not ruled out penalties being levied against the owners of a North Lanarkshire call centre which has seen a cluster of Covid-19 cases.

Six cases were reported on Sunday within the Sitel call centre at Eurocentral business park near Bellshill, which is currently working on test and trace cases for NHS England.

John Swinney said on Monday that the outbreak was a matter of “serious concern”, adding the Scottish Government believed there had been transmission between staff.

Mr Swinney also said investigations would need to be undertaken to “get an understanding” of how guidance was being followed within the facility.

When asked on the BBC’s Good Morning Scotland radio programme on Monday if penalties could levied against Sitel, Mr Swinney said: “These are all issues that will be explored, but what our primary focus is on is to make sure that we interrupt any transmission of the virus.

“The virus is at a very low level within Scottish society today, the compliance efforts of members of the public have successfully reduced the prevalence of coronavirus, but we have to keep it that way.”

Mr Swinney added that actions being taken by NHS Lanarkshire and North Lanarkshire Council were “reassuring”.

The outbreak was discovered on Sunday morning, with all members of staff asked to work from home and being offered a test for Covid-19.

Measures have been brought in by the region’s health board to try to suppress the outbreak.

“We take the safety and wellbeing of our staff very seriously. Everyone at the site is currently working from home while a deep clean takes place, and will be offered a test within the next 24 hours.”

NHS Test and Trace is a service operated by the NHS in England to track and help prevent the spread of Covid-19 south of the border.

Earlier, Professor Hugh Pennington, emeritus professor of bacteriology at the University of Aberdeen, told the same programme: “I’m not surprised to hear about a cluster because that’s the way this virus behaves; it’s done that in all the other countries that we have good records for, that getting on for half the cases do occur in outbreaks and some of them can be quite big.

“This is clearly not a particular surprise that we have a cluster of cases in Scotland because we know the virus has not gone away, but it’s a bit disappointing we’ve got these two days where we’ve got more than 20 cases because for quite a long time now we’ve been seeing most parts of Scotland recording no new cases at all.”

He added that it is too early to tell whether the jump in cases is due to the easing of lockdown measures, and said that carrying out more testing will also pick up more cases.

Figures released by the Scottish Government on Sunday showed Scotland recorded 23 new confirmed cases of coronavirus in 24 hours – the highest increase in almost a month – and up two from 21 on Saturday.

Sunday’s figures marked five consecutive days with rising cases, up from three on Tuesday, although no further deaths of people who have tested positive for Covid-19 have been recorded, remaining at 2,491.