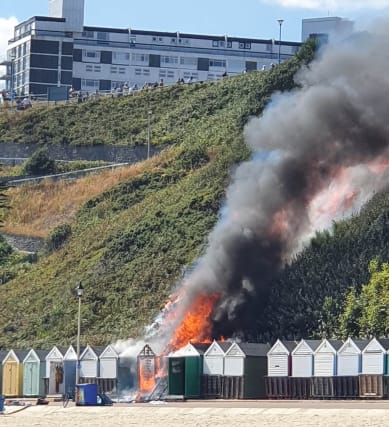 A dramatic blaze that spread across cliffs on Bournemouth's seafront after a beach hut caught fire was caused by a cooking accident, the fire service has said.

The fire, on West Undercliff, affected three beach huts and spread over around 100 meters of heath on the cliff face on Monday afternoon.

Dorset & Wiltshire Fire and Rescue Service was called at 3.51pm and it took multiple crews and a helicopter to bring the blaze under control.

A spokeswoman said it was understood the fire started in the beach hut when a camping stove was knocked over.

She said the blaze had been brought under control by 5.30pm, although crews had remained at the scene damping down for a few hours more.

No-one was injured in the incident.

Videos and pictures posted on social media showed fire burning up the cliff face, with plumes of black smoke visible from a distance.

Local residents were asked to close their windows as a precaution, while Dorset Police set up a cordon around the scene.