Amber Heard claims she was afraid Johnny Depp would kill her 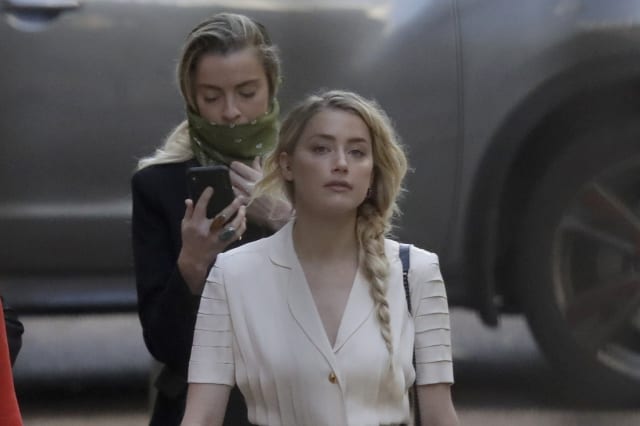 Amber Heard has alleged she was afraid Johnny Depp was going to kill her.

The Aquaman actress claimed Mr Depp, 56, threatened to kill her "many times", especially later in their relationship.

She also alleged the Pirates Of The Caribbean star was "very good at manipulating people" and would blame his actions on a "self-created third party" he called the "monster".

Ms Heard, 34, is beginning three days of evidence at the Royal Courts of Justice in London as part of Mr Depp's libel case against The Sun newspaper over a 2018 article that labelled him a "wife beater".

In a written witness statement submitted to the court, Ms Heard accused Mr Depp of subjecting her to verbal and physical abuse – including screaming, swearing, issuing threats, punching, slapping, kicking, head-butting and choking her, as well as "extremely controlling and intimidating behaviour".

She alleged: "Some incidents were so severe that I was afraid he was going to kill me, either intentionally or just by losing control and going too far.

"He explicitly threatened to kill me many times, especially later in our relationship."

Ms Heard claimed Mr Depp has a "unique ability to use his charisma to convey a certain impression of reality".

"He is very good at manipulating people," she said in her statement.

She added: "He would blame all his actions on a self-created third party instead of himself, which he often called 'the monster'.

"He would speak about it as if it was another person or personality and not him doing all these things."

In the statement, Ms Heard said she had "never been with someone like him (Mr Depp)", and the early days of their relationship were "the best times", adding he could be "intensely affectionate, warm and charming", which she said she called "the warm glow".

She went on to say: "When Johnny puts his attention on you, with all his intensity and darkness, it is unlike anything I've ever experienced.

"When I say he was dark, he had a violent and dark way of speaking: the way he talked about our relationship being 'dead or alive' and telling me that death was the only way out of the relationship."

She added: "He could be very intense and dark. It was the polar opposite of 'the warm glow'."

The statement says: "To hear him talk about his childhood or past relationships, he is always the victim. He functions off zero accountability to anyone and thrives off others who provide him with that.

"It is very rare to see anyone — professionals, doctors, lawyers, film executives — say no to him. I tried to, but it didn't go down well."

Ms Heard also said she thought she could "fix Johnny", saying: "I thought he could get better and that he would, and I wanted that so badly right to the end.

"After violent episodes, his team would try to convince me to stay with him or to come back, often telling me he was sorry and would get clean for me.

"I think I stayed not only because I had hope of him getting clean and things changing, but also because of the responsibility I felt, being told I was the one to motivate him and help him to get clean."

Ms Heard is facing questioning over 14 allegations of domestic violence – all denied by Mr Depp – which The Sun's publisher, News Group Newspapers (NGN) relies on in defence of the April 2018 article.

The court has so far heard nine days of evidence about Mr Depp's Hollywood lifestyle, his use of drink and drugs and his attitudes towards women, as well as his and Ms Heard's volatile relationship – described by Mr Depp as "a crime scene waiting to happen".

Mr Depp and Ms Heard met on the 2011 film The Rum Diary and began living together in 2012 before marrying in Los Angeles in February 2015.

Ms Heard obtained a domestic violence restraining order against Mr Depp in LA shortly after the couple split in 2016 and later donated her seven million US dollars (£5.5 million) divorce settlement to charity.

Mr Depp is suing NGN and Mr Wootton over the publication of an article on April 27 2018 with the headline: "Gone Potty: How can JK Rowling be 'genuinely happy' casting wife beater Johnny Depp in the new Fantastic Beasts film?"

His lawyers say the article bore the meaning there was "overwhelming evidence" Mr Depp assaulted Ms Heard on a number of occasions and left her "in fear for her life".

NGN is defending the article as true, and says Mr Depp was "controlling and verbally and physically abusive towards Ms Heard, particularly when he was under the influence of alcohol and/or drugs".

Mr Depp is suing Ms Heard in separate libel proceedings in the US over a December 2018 column in the Washington Post, which did not mention Mr Depp by name, but said the actress received "the full force of our culture's wrath for women who speak out".