What has happened to relations between the UK and China? 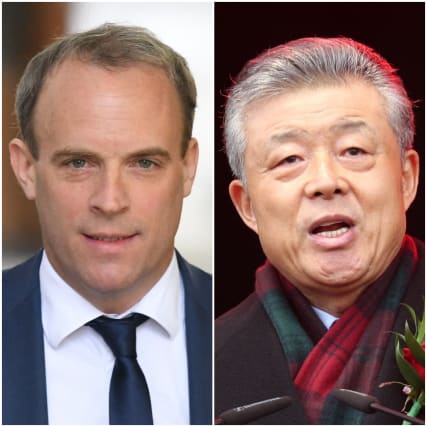 The Government is considering suspending Britain’s extradition treaty with Hong Kong, after China imposed a tough new national security law on the territory.

The potential move would infuriate Beijing, which is already angry at the Government’s decision to exclude Chinese technology giant Huawei from the UK’s 5G network.

How have the two nations reached this point and what role has Hong Kong played in the process?

– What is Britain’s link to Hong Kong?

Hong Kong island was ceded to Britain after China’s defeat in the First Opium War in the 19th century, with China later leasing the New Territories, which forms Hong Kong’s rural areas, to Britain for 99 years in 1898.

The approaching expiration led to the Sino-British Joint Declaration, signed in 1984, in which Britain agreed to return Hong Kong to China in 1997.

It became a Special Administrative Region of China run under the “one country, two systems” principle.

Hong Kong was to have its own government and legislature composed of Hong Kong people, while its capitalist system, currency and financial markets were to remain intact.

– What has happened since?

Critics have long accused China of eroding Hong Kong’s special status, and pro-democracy protesters took to the streets of Hong Kong last year in response to Beijing’s tightening grip on the territory.

Hong Kong’s legislature has now passed a controversial, Beijing-backed national security law which makes activities deemed subversive or secessionist punishable by imprisonment, and which is seen as targeting anti-government demonstrators.

– How did the UK respond?

The Prime Minister vowed to introduce a new route for people in Hong Kong with British National (Overseas) status to apply for visas to live and work in the UK and apply for citizenship.

Downing Street said those who qualify would be eligible to travel to the UK immediately ahead of the details of the scheme being finalised and that they would not face salary thresholds.

– How does Huawei fit in?

The Prime Minister ordered telecoms firms to remove Huawei equipment from the 5G network by 2027 in a move costing billions and delaying the deployment of 5G by up to three years.

The ban came after a Government-ordered review found the security of Huawei’s equipment could not be guaranteed because of US sanctions.

– How did China respond?

Beijing accused Britain of working with the US to “discriminate, oppress and exclude” Chinese firms and warned of jeopardised relations.

In London, China’s UK ambassador Liu Xiaoming claimed Britain was behaving like a “junior partner” of the US.

He suggested ministers imposed the ban because they “had to succumb to pressure” from “China hawks and China-bashers”.

– Has this involved any other firms?

Reports on the weekend said Chinese social media company TikTok had broken off talks to open a global headquarters in Britain.

Communist Party officials were also reported to have warned UK companies operating in China, including Jaguar Land Rover, BP and GlaxoSmithKline, that they could now face retaliation.

– So the whole thing started with Hong Kong?

The territory has certainly been the focal point of relations between the UK and China for more than 100 years.

But the relationship has been further complicated recently by the coronavirus pandemic and allegations of human rights abuses against an ethnic minority in China.

US President Donald Trump has escalated tensions with China during the pandemic, accusing it of responsibility for the virus and claiming Chinese officials “ignored” their reporting obligations to the World Health Organisation.

A similarly antagonistic position has not been taken up by Mr Johnson, though Mr Liu appeared to criticise Britain when he told the BBC that “Western countries, headed by the United States, they started this so-called new cold war on China”.

– What about accusations of human rights abuses?

He said the UK could not stand by while abuses such as forced sterilisations and mass re-education camps took place.

“It is clear that there are gross, egregious human rights abuses going on. We are working with our international partners on this. It is deeply, deeply troubling,” he told The Andrew Marr Show.

The Foreign Secretary said he would also be updating MPs on Monday on the Government’s response to the national security law on Hong Kong.

Mr Raab also says he has had discussions with Home Secretary Priti Patel amid reports the UK may sanction Chinese officials and act to suspend the extradition treaty with the territory.

Mr Liu warned it would be “totally wrong” for Britain to issue any sanctions but said Beijing was ready to respond in kind.