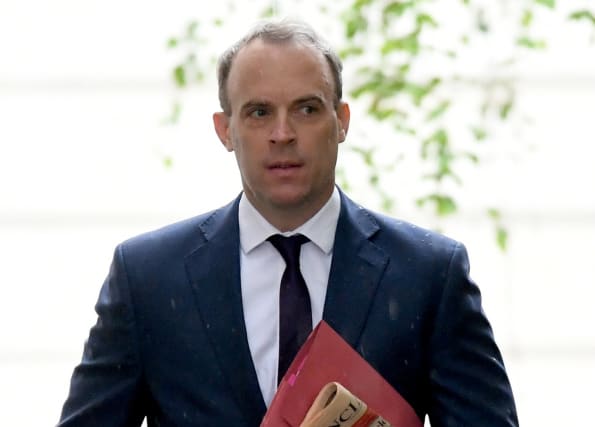 Foreign Secretary Dominic Raab is to set out further measures in response to China’s imposition of a tough new national security law on Hong Kong amid growing tensions with Beijing.

The Government looks set to follow the example of the US, Canada and Australia and suspend the UK’s extradition treaty with the territory – a move that would infuriate China.

In a strong signal that he is ready to go down the same route, Mr Raab confirmed at the weekend that he had completed a review of Britain’s extradition arrangements as part of the next steps.

China was already smarting over the Government’s decision last week to exclude the tech giant Huawei from the UK’s 5G network – reversing a decision in January allowing it a limited role.

The Chinese ambassador to the UK, Liu Xiaoming, said Beijing was still evaluating its response to the Huawei ruling.

There were reports at the weekend that the the Chinese social media company TikTok had broken off talks to open a global headquarters in Britain.

Communist Party officials were also reported to have warned UK companies operating in China, including Jaguar Land Rover, BP and GlaxoSmithKline, that they could now face retaliation.

Mr Liu warned Britain not to get drawn into a “tit-for-tat” confrontation in the way the US had, imposing sanctions on Chinese officials over alleged abuses in Xinjiang, prompting Beijing to sanction a number of US senators and officials.

Mr Raab played down suggestions any such measures were imminent under the UK’s new independent sanctions regime, saying that it took a long time to build a case against any alleged abusers.

He insisted also that Britain wanted a “positive relationship” with China, working with it on issues like climate change as well as trade and investment.

However, with further UK measures due now on Hong Kong, relations look set to deteriorate even further.

The Government says the new national security law violates the Sino-British Joint Declaration which was supposed to guarantee Hongkongers’ way of life for 50 years after the handover of the former British colony in 1997.

In response, it has already offered a path to UK citizenship for three million Hongkongers eligible for British National (Overseas) passport – a move which enraged Beijing.

In a combative BBC interview on Sunday, Mr Liu denounced Britain for “dancing to the tune” of the US and accused Western countries of trying to foment a “new cold war” with China.

He suggested video footage, said to be from Xinjiang, showing men, kneeling and blindfolded waiting to be led onto trains by police officers was “fake”.

Meanwhile, China is expected to be high on the agenda this week when US Secretary of State Mike Pompeo travels to London for talks with senior British figures.

Mr Pompeo flies out on Monday ahead of meetings expected on Tuesday with Boris Johnson and Mr Raab, as well as MPs pressing the Government to take a harder line on China.

The US has warmly welcomed the Government’s U-turn on Huawei, which followed intensive lobby by the Trump administration.

Ministers said they had little choice after the intelligence services warned they could no longer be sure Huawei products were secure after the US imposed fresh sanctions on the company.