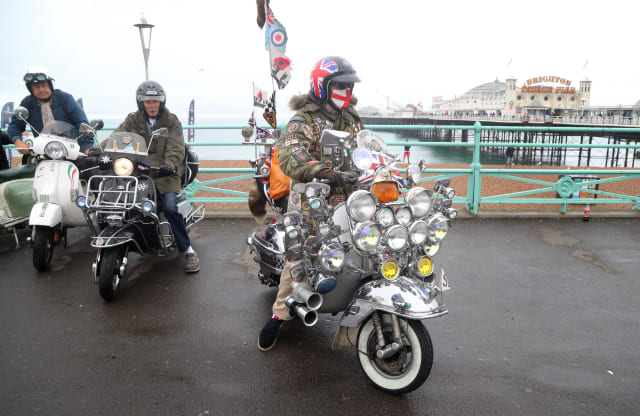 Dozens of Mods and Rockers have converged on Brighton’s Madeira Drive as part of a battle to reopen the iconic seafront road to vehicles.

Brighton and Hove City Council closed the road – the setting of the The Who musical Quadrophenia and the battle between the scooter and motorcycle gangs – during the Covid-19 lockdown to provide more outdoor space for residents to exercise and while traffic levels were reduced.

The local authority is now considering keeping the road permanently closed, with special events such as the Veteran Car Run being allowed to take place, with a final decision set to be made in the autumn.

The proposal has angered both Mods and Rockers who united for the demonstration on Sunday which was attended by about 150 people.

Laura King, of the Brighton and Hove Heritage Commission, said: “It is absolute madness that the council has closed a road that brings in millions of pounds into the economy at a time when we are entering a recession.

“There are 35 traders who are on rent strike with the council as they are normally only allowed to close it for 21 days.

“The road was not closed lawfully, it was closed with no notice, it was meant to be temporary but there is no end to temporary.

“The road also has plenty of dedicated cycling space, it’s a very wide road and cyclists are still using the cycle way so you never see anyone walking or cycling on the road.”

Ms King added that the council had not carried out emission tests and had not presented an environmental argument for targeting Madeira Drive.

More than 10,000 people have signed a petition calling for the road to be reopened which will be presented to the council later this month.