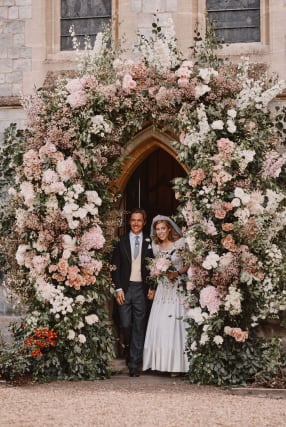 The flowering plant was first carried by the queen’s eldest daughter Princess Victoria when she married in 1858, and has formed part of a regal tradition ever since.

The bouquet was created by Patrice Van Helden Oakes, the sister of floral designer Rob Van Helden, who also designed the wedding flowers for Beatrice’s sister Eugenie’s wedding in 2018.

Mr Van Helden said the bride and groom Edoardo Mapelli Mozzi were involved in designing the bouquet, which included Beatrice’s favourite sweet avalanche pink roses while Mr Mapelli Mozzi chose to include Norma Jeane white roses, one of his favourites.

“They wanted to keep it natural, with dusky pink roses, British flowers and a vintage look,” Mr Van Helden said.

“It has been a huge honour and privilege to be part of this special and magical day.

“They are friends of ours, and my sister and I are both blown away by the reaction we’ve had.”

The myrtle for royal bouquets usually comes from the terraced walls of Osborne House, the Isle of Wight home of Queen Victoria and Prince Albert.

The Duchess of Sussex, the Duchess of Cambridge, the Queen, Diana, Princess of Wales, Princess Eugenie and her mother Sarah, Duchess of York all had myrtle in their wedding bouquets.

After the wedding, the bouquet was placed on the tomb of the Unknown Warrior in Westminster Abbey, another royal tradition which began with the Queen Mother, when her posy was left at the grave in 1923 after her wedding to the Duke of York, later George VI.