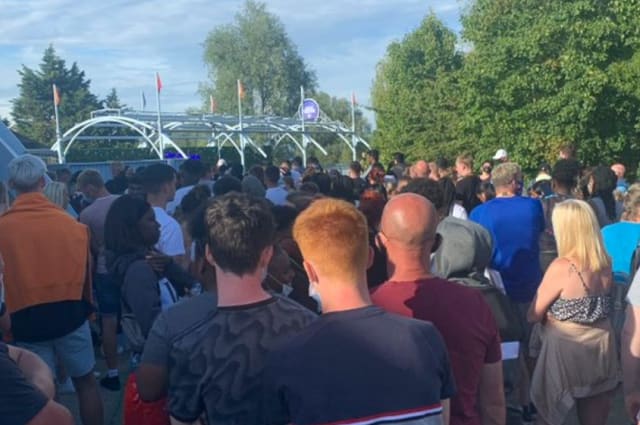 Two men have been arrested on suspicion of attempted murder after a stabbing at Thorpe Park, police said.

The victim, a man in his 20s, suffered a serious slash wound to his stomach after an "altercation" between two groups on a footbridge near the exit of the popular amusement and rollercoaster resort on Saturday afternoon.

He was taken to hospital after the attack shortly before 5pm and his condition is serious, Surrey Police said.

The force said two suspects, also aged in their 20s, were arrested after investigations at the scene on Staines Road. They are currently in police custody.

Park-goers were locked down as police rushed to the popular theme park near Chertsey, Surrey, with images on social media showing crowds bunched together inside.

Security teams carry out bag searches and regularly patrol the premises and investigations are ongoing into how a weapon was brought in.

In a statement, Detective Inspector Andy Greaves appealed for witnesses and said officers were tracing "all those believed to have been involved".

He said: "I'm keen to hear from anyone who saw what happened or who has video footage of this assault. The two groups of people were close to the exit inside the park on the bridge when the assault took place.

"We're still trying to establish what has happened, however I'd like to stress that this incident is not being treated as terrorism-related at the current time."

In a statement, Thorpe Park said its on-site medical staff provided emergency first aid and said it was helping police with its inquiries.

The statement said: "The health, safety and security of our guests is our primary objective. We have an excellent security track record and have never had any incidents of this kind in over 40 years."

Thorpe Park re-opened earlier this month on July 4 after being shut due to the coronavirus pandemic.