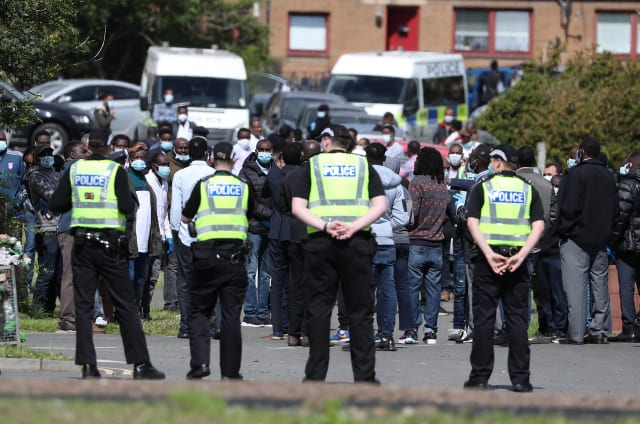 The funeral of a man shot dead by police after stabbing six people in a knife attack in Glasgow has seen "several hundred" attend.

Badreddin Abadlla Adam's burial service was expected to be held at Linn Cemetery in Glasgow at 2pm on Saturday afternoon, but police were called after a large crowd gathered in breach of coronavirus restrictions.

The 28-year-old from Sudan was shot by armed officers after injuring six people, including 42-year-old police constable David Whyte, during the attack at the Park Inn Hotel in June.

By 3pm the funeral had not begun and three police vans were in attendance, with officers attempting to disperse a crowd of hundreds.

The Scottish Government's current rules allow for a maximum of 20 guests at funeral services during the latest phase of lockdown restrictions being eased.

A Police Scotland spokeswoman confirmed that officers were in attendance "assisting staff with social distancing regulations".

At the time of his knife attack, Adam was being temporarily housed in the hotel that was being used as accommodation for asylum seekers during the coronavirus pandemic.

He was described as a "quiet and polite and decent guy" by asylum seekers who were also residing at the city centre hotel.

Mourners who arrived for the funeral far exceeded the Scottish Government's maximum limit of 20 guests during the current phase of the lockdown, meaning the majority had to congregate in a nearby car park while the service took place.

A Glasgow City Council spokeswoman said: "Due to the current coronavirus restrictions, only 20 people are allowed to attend a funeral for health and safety reasons.

"Several hundred people turned up and, unfortunately, the service had to be delayed, until it was safe to proceed in accordance with Scottish Government guidance.

"This was to protect the health of the funeral party as well as our staff on-site."

Speaking on the Monday following the attack, a fellow resident by the name of Andrew said: "Recently we were moved from the Park Inn Hotel to the Hallmark Hotel because of the incident that happened on Friday which has been traumatic for every single asylum seeker."

Pc Whyte, one of the attacker's six injured victims, paid tribute to police and medical staff after being discharged from hospital a week on from the attack.

"There is no doubt that I face a long road to recovery but I am absolutely determined to be back on duty as soon as I possibly can," he said.

"I would like to thank the medical staff at the Queen Elizabeth University Hospital for saving my life and getting me back to where I am today."

At the time of his discharge on July 2, four other men remained in hospital, three in a stable condition while one was still critical.