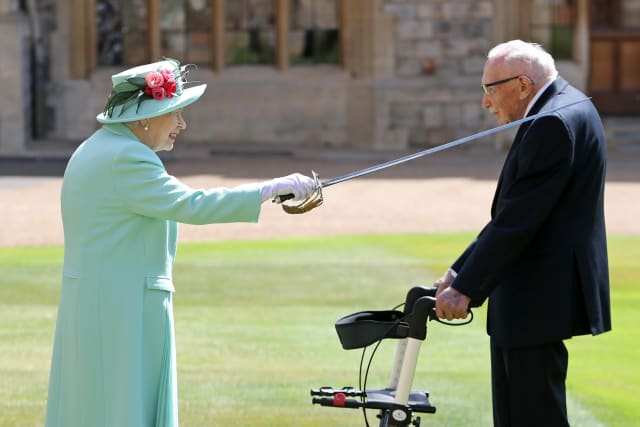 Newly knighted Captain Sir Tom Moore has said being presented with the honour by the Queen was “something very special”.

The national hero was personally thanked by the Queen for raising an “amazing amount of money” for the NHS when she knighted him for his efforts.

Sir Tom appeared humbled following his audience with the Queen and said he was “absolutely overawed” to receive the knighthood during the unique open-air ceremony at Windsor Castle.

He told BBC Breakfast on Saturday that it had been a “marvellous” day and the Queen was an “absolute dream of a person”.

He added: “You never, ever could imagine what it was like to be so close to the Queen, who is an absolute dream of a person.

“We really enjoyed ourselves thoroughly and to have that honour, really, that is something very special.”

In brilliant summer sunshine and with his family standing nearby, the head of state praised the Second World War veteran for collecting almost £33 million: “Thank you so much, an amazing amount of money you raised.”

But Sir Tom said he would not tell people what he and the Queen had spoken about.

He added: “The Queen and I had a little private conversation and that will stay between the two of us for all time.”

Sir Tom had set out to raise £1,000 by walking 100 laps of his garden in the village of Marston Moretaine in Bedfordshire before his 100th birthday on April 30.

But his efforts struck a chord with national feeling, and praise and donations flooded in, with Prime Minister Boris Johnson saying the veteran “provided us all with a beacon of light through the fog of coronavirus” and recommended he be knighted.

Answering questions from the press after the ceremony he said: “I am absolutely overawed, this is such a high award and to get it from Her Majesty as well, what more can anyone wish for?

“This has been an absolutely magnificent day for me.”

The veteran went on to say: “To meet the Queen was more than anyone could expect, never ever did I imagine I would get so close to the Queen and have such a kind message from her, that was really outstanding, it was truly outstanding.”

The Queen appeared to warm to Sir Tom, who is from the same wartime generation as the monarch, and his family, daughter Hannah Ingram-Moore, son-in-law Colin Ingram, grandson Benjie and granddaughter Georgia.

In her first face-to-face royal engagement with the public since March, albeit with social distancing, she chatted to them for around five minutes taking in subjects from Princess Beatrice’s wedding earlier that day to the lockdown.

“My granddaughter got married this morning, both Philip and I managed to get there – very nice,” she revealed, and after spending months shielding with the Duke of Edinburgh at Windsor she asked: “Have you been shut up – been isolating?”

Sir Tom said the Queen highlighted the millions people had donated: “She did mention the money and she thought it was a magnificent sum to raise.”

At the end of his press interviews Sir Tom quipped, “Is that all?” after being told he had answered his last question.

And when a journalist said it was probably too hot for him in the sun, he looked down at his wartime medals and joked: “All this metalwork reflects the heat.”

Sir Tom answered one last question to reveal he and the 94-year-old monarch had talked about ages.

His daughter said the Queen had asked to see them as a family and she summed up the appeal of her father, adding: “I think what happened is he became a beacon of hope, of positivity at a time that was super challenging for not just us but the whole country and in fact the rest of the world.”

The family later celebrated by having a traditional afternoon cream tea at a nearby hotel, following a whirlwind four months that had seen David Beckham visit the former Army officer and Sir Tom made an honorary colonel for his fundraising efforts.