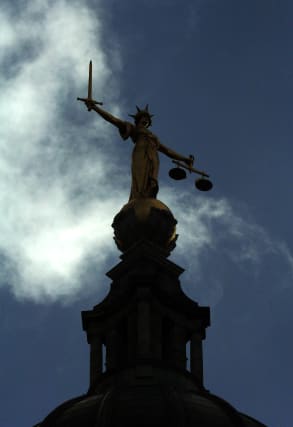 New figures have revealed the full scale of the backlog of rape and murder cases which were already in the system when the courts were put in coronavirus lockdown.

Latest data released by the Ministry of Justice (MoJ) shows that as of March 31, a week after Prime Minister Boris Johnson announced the introduction of lockdown measures, 354 murder cases were waiting to be dealt with in crown courts, with 76 outstanding in magistrates’ courts in England and Wales.

The same figures show 1,159 rape cases were outstanding in crown courts and 1,911 in magistrates’ courts.

An additional 2,424 cases of robbery were outstanding across the criminal justice system, the data released in response to a written parliamentary question from Liberal Democrat leadership hopeful Layla Moran also showed.

Labour said the scale of the backlog of serious and violent crimes was “wholly avoidable” and said the Government “owes every victim an apology”.

The lockdown exacerbated the backlog of criminal cases awaiting trial, which according to critics had already been increasing as the Government cut sitting days for crown court judges.

Some jury trials resumed in May, after almost two months on hold, but last month during a hearing of the Justice Select Committee, Justice Secretary Robert Buckland warned that work to clear the backlog in court cases caused by the lockdown could continue into next year.

Answering Ms Moran’s question, Justice Minister Chris Philp said the figure for outstanding cases in magistrates’ courts is based on all cases with a case opened date prior to 31 March 2020, and no case completion date, irrespective of when the offence was committed.

It comes after data released by the Ministry of Justice in June laid bare the impact of coronavirus on criminal justice, showing that magistrates’ courts faced a backlog of more than 480,000 cases.

The backlog in crown courts last month stood at about 41,000 cases.

Sir Bob called for extra money from the Government to be made available to allow all courts to sit at maximum capacity “for as long as it takes” to get the backlog down.

He said: “These figures are very troubling. These are amongst the most serious criminal offences and because of that all of those currently in the magistrates’ court will have to be sent to the crown court for hearing.

“The backlog in the crown court is already unacceptably high, which in turn is unfair both upon defendants, especially those remanded in custody, and upon witnesses waiting to give evidence about very traumatic events.

“The Government must make extra money available to ensure that all courts sit to maximum capacity for as long as it takes to get this backlog down and give priority to these particularly serious cases.”

Shadow justice minister Peter Kyle also told PA: “The justice system has been brought to its knees by a double whammy of prolonged under-investment followed by the Covid crisis.

“As a result, thousands of victims of violent sexual crimes and murder are being denied the swift justice they deserve. Delays like this make the suffering of victims worse and can lead to difficulties with prosecution.

“The Labour Party offered the Government constructive, workable solutions to avoid this entirely predictable crisis from happening, such as creating ‘Nightingale courts’ in community settings. But they failed to act.

“Some delays were inevitable, but this scale of serious and violent crime awaiting its day in court was wholly avoidable and the Government owes every victim an apology.”

The backlog of cases and long waits for trial dates has led some lawyers to call for the temporary scrapping of jury trials to speed up the process.

But Attorney General Suella Braverman told MPs last week that while measures to reduce the backlog of court cases due to Covid-19 were “still under consideration” and that “no decisions have been made yet”, she was “deeply committed to the right to a jury trial”.

Commenting on the new figures, an MoJ spokesperson said: “During the pandemic, we have kept the justice system running by prioritising urgent cases, rapidly expanding the use of remote hearings and are exploring alternative venues to increase capacity.

“The interests of victims have been at the heart of all the decisions we have made.”