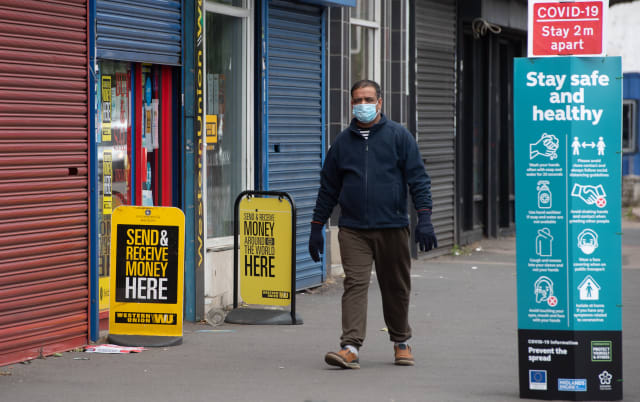 Lockdown measures imposed in late March to slow down the spread of coronavirus may not have been as effective in black, Asian and minority ethnic (BAME) communities because of the “one-size-fits-all approach”, scientists have said.

Academics at the University of Leicester found that Covid-19 cases continued to rise in BAME groups in certain parts of Leicester in the three weeks after the announcement was made, while rates in white groups “dropped off very sharply”.

They said the findings, published recently in the journal EClinicalMedicine by The Lancet, raise “serious questions” on whether lockdown on its own is effective for a diverse population.

Dr Manish Pareek, an associate clinical professor in infectious diseases at the University of Leicester, told the PA news agency: “Obviously, lockdown has had a huge impact in reducing infection rates but the question is, is it enough for certain parts of the country?

“Lockdown as a whole is quite a blunt tool… perhaps what we should be thinking about is a more nuanced approach which allows people to work with local solutions.”

Dr Pareek and his team studied patients admitted to the University Hospitals of Leicester NHS Trust.

They found the proportion of people from BAME groups who tested positive for coronavirus continued to rise for three weeks from March 23, peaking at 50.9%, but the figure for people from white backgrounds remained between 24% and 26%.

Dr Pareek told PA: “Of course, we can’t be clear about cause and effect, I think, but if we were speculating, there are a number of factors which potentially could explain these findings.

“One would be that people who come from diverse ethnic groups work in front-facing roles and are not necessarily able to work from home.

“Secondly, they may be part of large, multi-generational households, which increases the risk of infection, and, thirdly, there may have been issues as to whether the public health messaging actually got through to those populations (due to language and cultural barriers).”

Dr Pareek said that as recent research has shown that severe Covid-19 disproportionately affects BAME communities, there is an “urgent need to confirm an association between ethnicity and acquiring Covid-19 infection”.

He said tailored public health messaging aimed at specific BAME groups, along with targeted programmes on testing and contact tracing, are needed in preparation for future waves.

Dr Pareek said: “At the moment, there is perhaps a one-size-fits-all approach.”

He said that while there have been some targeted interventions in Leicester as the region experienced a fresh outbreak last month, these measures “should have been predicted in the first instance”.