Sir Ian Botham: From Lord’s to the Lords? 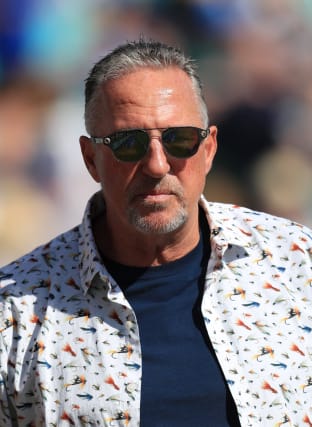 Sir Ian Botham, reported to be given a peerage from Boris Johnson, made his name as an all-rounder.

But his sporting exploits were not reserved to the cricket pitch, with the Cheshire native swapping the pads for boots and turning out for Yeovil and Scunthorpe in the Football League.

A member of England’s Greatest Test XI, Beefy is said to be adding another string to his bow with an elevation to the Lords as a reward for his support for Brexit.

On the cricket field, Botham took 383 wickets across 102 Tests and scored 5,200 runs and since retirement has moved to the commentary box as well as serving as Durham County Cricket Club’s chairman since 2017.

The 64-year-old was knighted in 2007 in recognition of his services to charity and cricket, having completed several charity walks between Land’s End and John O’Groats for leukaemia research.

On the political front, Sir Ian played the question of Britain’s departure with a straight bat, saying “enough’s enough”.

He appeared at a County Durham event with Mr Johnson in the lead-up to the referendum and said: “I have been lucky enough to grow up in a wonderful country, a country that has always been able to look after itself.”

But he felt power has been “eroded by Brussels”, adding: “I think, hang on, enough’s enough.”

Sir Ian said if the EU was inviting the UK to join afresh, we would “give it a very wide berth”.