Secret royal wedding – who are Beatrice and Edoardo? 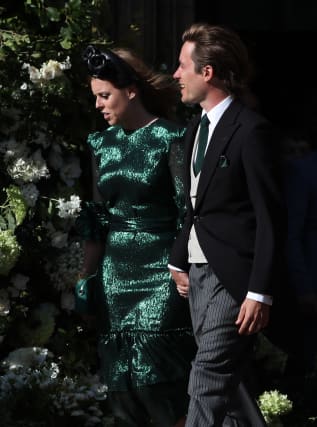 Princess Beatrice has married Edoardo Mapelli Mozzi during a ceremony in front of the Queen, after a planned wedding in May was postponed due to the Covid-19 outbreak.

Beatrice is the eldest daughter of the Duke of York and Sarah, Duchess of York.

Princess Beatrice Elizabeth Mary of York was born fifth in line to the throne on August 8, 1988.

–Where does she fall now in line to the throne?

Beatrice is ninth in line to the throne, following the arrival of the Cambridge children and Archie Mountbatten-Windsor.

Beatrice is not a full-time working royal.

The 31-year-old has a full-time job at Afiniti, an artificial intelligence software firm, where she is vice president of partnerships and strategy.

According to Afiniti’s website, she is “responsible for the management of the strategic Afiniti partnerships as well as company growth through unique initiatives and client development”.

– What about her charity work?

She has a number of royal patronages including Forget Me Not Children’s Hospice, the Teenage Cancer Trust and the Helen Arkell Dyslexia Centre.

– What else do we know about the princess?

She hit the headlines with the unusual “pretzel” hat which she wore to William and Kate’s wedding in 2011.

But she took it in good humour and auctioned the hat on eBay for charity, raising more than £81,000 for good causes.

She split from her long-term love Dave Clark in 2016, after 10 years together.

– What about her relationship with her sister Princess Eugenie?

The sisters are extremely close – but once had a massive fight over a pair of trainers.

Beatrice told British Vogue: “We have the same size feet and both of us had identical pairs. One pair got trashed and the other sister may have swapped them.”

Beatrice is also close to both her parents, who divorced when she was a child but remained friends.

She calls her mother, Sarah, Duchess of York, “mumsy” and her father papa.

He is a count himself, and has been a friend of the Yorks for some time.

His stepfather was Christopher Shale, a senior Tory and a close friend of former prime minister David Cameron. He died from heart disease at the Glastonbury Festival in 2011.

– And Beatrice becomes a stepmother?

Yes. Edoardo has a young son named Wolfie with his ex-fiancee Dara Huang.

– Where did the couple meet?

His family has known Beatrice for most of her life, being friends with the Yorks.

The princess is said to have begun dating Edoardo after meeting him again at Eugenie’s wedding.