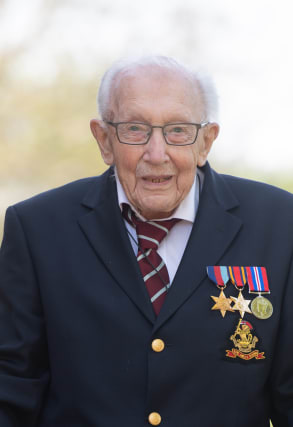 The family of fundraising hero Captain Sir Tom Moore have described the Queen’s decision to give him his knighthood in a unique private ceremony as “the icing on the cake” of his achievements.

Sir Tom won the hearts of the nation and the donations came flooding in after he set out on his challenge to walk 100 lengths of his Bedfordshire garden before his 100th birthday earlier this year.

While other investitures due to be held at Buckingham Palace in London and the Palace of Holyroodhouse in Edinburgh in June and July were postponed, a special exception has been made for Sir Tom.

The unprecedented personal ceremony will be staged in Windsor Castle’s quadrangle on Friday.

His daughter Hannah Ingram-Moore said the investiture was the “icing on the cake” of her father’s amazing year.

Speaking to BBC Breakfast ahead of the ceremony, she said: “We will take a leisurely pace down to Windsor – no rushing today and no falling, no tripping, and we have a fairly regimented day ahead of us.”

She added: “Protocol is being written as we speak and we will simply be doing as we are told.”

Sir Tom’s grandson Benjie said: “I just want to say thank you to absolutely everybody who has supported us.

His granddaughter Georgia added: “We are so proud of him and I’m so excited for this day.”

Ahead of the ceremony, Sir Tom said on his official Twitter account: “It is going to be the most special of days for me.”

The 94-year-old Queen has been staying at Windsor during the coronavirus pandemic for her safety, but will carry out the official engagement in person.

Buckingham Palace believes it is the first time the “unique” format of his ceremony will have taken place, amid the exceptional circumstances of the pandemic and Downing Street’s announcement of Sir Tom’s individual knighthood.

Royal commentator Dickie Arbiter described the Queen’s decision to give Sir Tom his knighthood in an individual ceremony as “very significant”.

He added: “The Queen has always said she ‘needs to be seen to be believed’ so today she will be seen – the last time we actually saw her physically was in June in the alternative Trooping the Colour at Windsor Castle.

“To actually see the Queen in person – this is a step in the right direction, a step hopefully back to new normality, but it will be a very slow step.”

The Queen will use the sword that belonged to her father, King George VI, and will present Sir Tom with the insignia of Knight Bachelor.