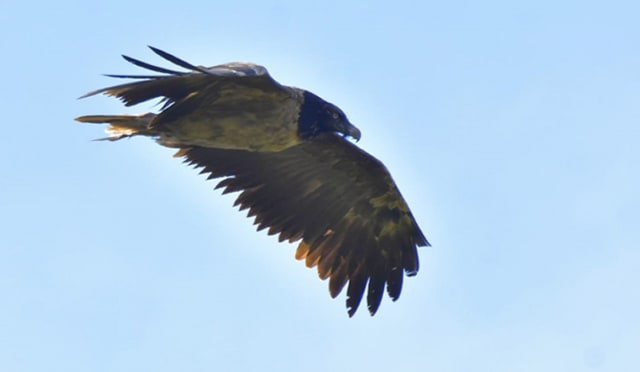 A huge European vulture "is like a turkey spending Christmas at a butcher's shop" after it settled in the heart of grouse shooting country, conservation groups have said.

But the RSPB and Derbyshire Wildlife Trust said the hundreds of enthusiasts who have flocked to a remote moor in the Peak District to see the bearded vulture are the visitor's best protection against "raptor persecution".

Scores of people have trekked on to the wild uplands between Sheffield and Ladybower Reservoir to see the vulture, which has a wing span of up to 9ft (3m) and has only ever been seen in the UK once before.

Dozens more are expected to venture on to the moor this weekend hoping to get a glimpse of the bird.

The RSPB says its database of deliberate bird of prey killings shows the vulture is roosting in a 10km grid-square with the worst record in the UK.

The charity's head of investigations Mark Thomas said: "National parks should be safe havens for birds of prey, as well as places for people to enjoy nature.

"For this magnificent bird to have turned up in such a dangerous location, a month before the start of the grouse shooting season, is like a turkey spending Christmas at a butcher's shop. But we hope this number of watchful eyes on the bird will ensure its safety."

Tim Birch, from Derbyshire Wildlife Trust, said there would be an "international outcry" if the bird was harmed but the massive interest was the best way to keep it safe.

Whilst we do want people to share in the excitement of this bearded vulture please do enjoy observing him from at least a 100m distance to avoid distressing him.
Tim Birch has written a blog on this magnificent bird with more info 🦅
👉 https://t.co/s5vaT2fbpD@TimBirchWildpic.twitter.com/pOADYCMvJj

Mr Birch said: "People have been coming to see it from all over the country and it is very exciting to see such a huge and rare bird.

"Unfortunately, in an area which should have the best protection, we see some of the worst ongoing bird of prey persecution.

"The sight of this spectacular bird gives a glimpse of the potential future the park could have in hosting a range of species, including top predators, creating a healthy, balanced ecosystem where wildlife could flourish for the benefit of all."

He said is it is "one of the most incredible birds on the planet".

The RSPB has compiled a list of incidents in the Peak District since lockdown started and says a particular concern for the vulture is over poison that may have been left for smaller raptors.

The bearded vulture on Howden Moor is thought to range up to 600km a day from its rocky roost and is believed to fly as far as Cheshire and Stoke-on-Trent during its daily outings – and possibly as far as the Lake District.

It is thought to have flown over the Channel at the end of June from central Europe, where there are only between 600 and 1,000 pairs in an area stretching from Spain to Russia.

The massive bird, which is also known as Lammergaier or "lamb vulture", feeds mainly on bones from the carcasses of large herbivores like sheep.

The Peak District Moorland Group said on its Facebook page: "Whilst Tim Birch, from the Derbyshire Wildlife Trust has used the arrival of this bird to score cheap shots against rural land management practices and suggest that rewilding would increase birds such as this vulture, gamekeepers and farmers will carry on actively managing our cherished moors to reduce wildfire, increase diversity and keep producing red listed bird species for all to enjoy."