Proportion of people marrying in England and Wales ‘steadily declining’ 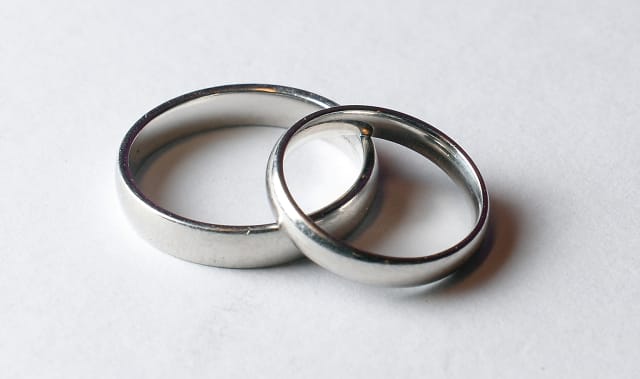 The proportion of people getting married is falling, and those who do tie the knot are waiting for longer, official statistics show.

Just over half of adults aged 16 and over in England and Wales (50.4%) were married or in a civil partnership in 2019, the Office for National Statistics (ONS) said.

There were 23,015,912 people married or in a civil partnership in England last year – just over half (50.6%) of the total population of marrying age.

While it remains the most common marital status, the proportion is “steadily declining” across all age groups except for the over-70s.

In 2009, the equivalent proportion of people married or in a civil partnership in England was 52.2%.

This decline is particularly marked in people aged 50 to 69, with a decrease of 5.5 percentage points (to 67%) compared with a decade earlier.

In contrast, the proportion of the population who are married or in a civil partnership has increased for those aged 70 years and over to 54.8%, 3.8 percentage points higher than a decade earlier.

Nine in 10 adults aged 16-29 were single in 2019 – a proportion the ONS said has been increasing “as people choose to postpone entering a legal partnership”.

At the same time, the overall proportion of adults who are single, have never married or been in a civil partnership is rising.

Amanda Sharfman, from the ONS’s Centre for Ageing and Demography, said: “We see slow changes in the composition of the population aged 16 years and over by marital status over time.

“Married remained the most common marital status, accounting for just over half of the population in 2019, but this proportion is steadily declining except among those aged 70 years and over.

“This reflects improvements in life expectancy over time, as well as an increase in marriages and divorces in later life.”