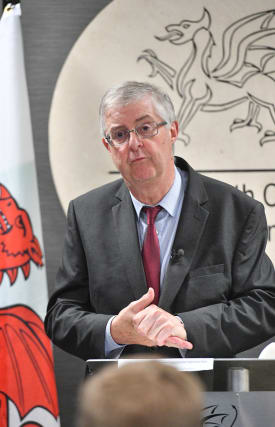 The First Minister of Wales has said there were “very real fears” that supermarkets would run out of food, the NHS would be overwhelmed and there would be a lack of space to bury the dead at the beginning of the coronavirus crisis.

Mark Drakeford told a press conference in Cardiff that there had been concerns that vulnerable people would not have access to basic supplies or a “safety net” of services.

But he said those “worst fears” had been averted due to people in Wales following the rules, including the Stay at Home and the Stay Local regulations.

Mr Drakeford was speaking at the final daily Welsh Government press conference on Friday. There have been 97 such briefings since March.

He said the first time he spoke of coronavirus in a press conference was on March 2, shortly after Wales’ first case of the virus had been confirmed in someone who had been on holiday in Italy.

“Within weeks we saw the virus rapidly accelerate in Wales and a decision to introduce the UK-wide lockdown,” Mr Drakeford said.

“Now in the middle of July it’s difficult to remember in how those early days we faced so very many real fears as the virus changed the way we lived our lives.

“We were genuinely worried that supermarkets may have run out of food, that our NHS would have been overwhelmed – that we would have had neither the beds nor the equipment for those who needed them.

“We feared we would run out of places to bury the dead, that our most vulnerable people would have no access to basic supplies, the poorest families in Wales would be without the safety net of services on which they rely and that our economy would be overwhelmed.”

Mr Drakeford said since then, businesses had been lost, children’s education had been affected, families had been unable to see loved ones and more than 2,400 people in Wales had died.

He stressed that for those who had lost loved ones, the coronavirus crisis “is certainly not over”.

The first minister thanked people who worked in public services, health and social care, local authorities, volunteers, teachers and support staff as well as “people who collect our bins, who drive our buses and who have kept shops open”.

Mr Drakeford referred to the “darkest days” in April, when the virus was at its peak in Wales.

At that time, there were hundreds of positive Covid-19 cases reported and 149 people admitted to hospital for the virus each day.

There were 164 people with the virus in intensive care in the middle of April, and 10 on Friday.

During the peak, 43% of tests each day in Wales were positive for Covid-19 but this has now fallen to less than half of 1%, Mr Drakeford said.

“While coronavirus is and has been in retreat in Wales, the crisis is not over,” he said.

He said that without a vaccine, the virus would be present for “some time to come”.

In September, the Welsh Government will work with the NHS on plans for the winter – including making sure that field hospitals in the country are ready if required, Mr Drakeford added.