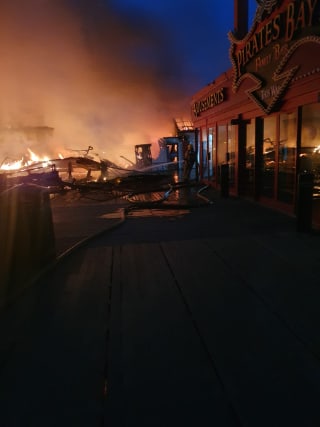 A fairground ride has been completely destroyed by fire after a blaze broke out on Blackpool’s Central Pier.

Ten fire crews were called out to the blaze just after 3am on Friday, Lancashire Fire and Rescue Service said.

A spokesman for the service told the PA news agency a fairground ride had been completely destroyed and a significant portion of the outside of a workshop-type building had been destroyed.

The fire was quickly brought under control after crews arrived on the scene and investigations would be carried out into its cause, the service said.

“Fortunately we had some of the conditions in our favour so we did not have a particularly strong wind and the tide was out, so we were able to tackle the fire below from the beach as well.”

In a statement, Lancashire Fire and Rescue Service said: “Crews will remain to monitor for any hotspots and damp down.

“An investigation into the cause of the fire will begin as soon as possible.

“The earlier road closures in place are now being lifted.”

By 11am, two fire crews remained at the scene.

Drone pictures released by the fire service showed the damage to the middle section of the pier.

The Central Pier is one of three piers in the seaside resort and was opened in 1868.

It is known for its attractions, amusements, shows and shopping.