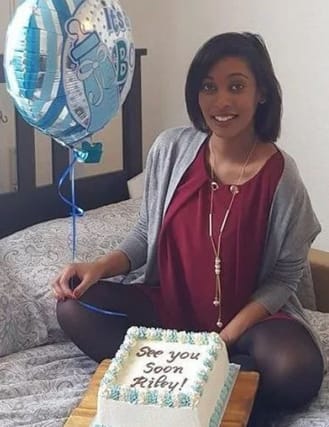 An “evil” man has been jailed for at least 35 years for killing his heavily pregnant ex-girlfriend and their baby in a jealous rage.

Crane operator Aaron McKenzie, 26, broke into Kelly Fauvrelle’s bedroom as she slept and stabbed her 21 times, the Old Bailey was told.

Their son Riley was delivered by Caesarean section but died in hospital four days later.

A jury deliberated for less than three hours to find McKenzie, from Peckham, south London, guilty.

On Friday, Judge Mark Lucraft QC jailed McKenzie for life with a minimum term of 35 years for the murder of 33 weeks pregnant Miss Fauvrelle.

He also handed him 20 years for the manslaughter of baby Riley and three years for possession of a knife, to run concurrently.

The judge told him: “At around 3.15am on June 29 last year, you broke into Kelly’s bedroom at the home she shared with her family.

“You then launched a ferocious attack on Kelly, inflicting no fewer than 21 stab wounds.

“Kelly’s family woke to the noise of her screams, rushed to her room and sought to care for her.

“It’s clear from all the evidence this was the most vicious and deliberate killing.”

It was the “cowardly” response to learning Miss Fauvrelle wanted nothing to do with him, and his actions afterwards demonstrated no “sorrow or remorse”, he said.

McKenzie gave the judge a thumbs up as he was sent down while Miss Fauvrelle’s family wept in court.

One of them shouted out at him: “Yes. I hope you have a good time in jail. Baby killer.”

In a victim impact statement, Miss Fauvrelle’s sister Melissa said: “This was an act of pure evil.”

She said her sister was a selfless, caring, loving woman with a “pure heart”.

“My heart physically aches but those words do not feel sufficient.”

He said his daughter and grandson had been “stolen”, adding: “A baby comes into this world defenceless and it’s up to his mother and father to love and protect him and give him the world. Instead his father took away his world.”

The trial had heard Miss Fauvrelle’s relationship with McKenzie, with whom she shared an interest in motorbikes, had ended early last year.

In February, McKenzie messaged that he was feeling “not needed, not wanted, unimportant and lost” as he appealed to her.

Miss Fauvrelle told him he needed professional help, saying: “Until u get the fact I don’t want to be with you anymore… I will no longer speak or see you unless is about the baby.”

Last March, Miss Fauvrelle told his mother that the relationship was “toxic” but she would not deny him access to their child.

Afterwards, McKenzie pretended to have nothing to do with it, the court heard.

He went to the hospital where medical staff were trying to save the life of his child, “posing as a victim”, prosecutor Duncan Penny QC said.

The defendant lied to police and did not tell them that he had spent more than an hour before the killing accessing and reading his ex-partner’s emails.

McKenzie continued to deceive police, hospital staff and Ms Fauvrelle’s family until he was arrested and “confessed”.

In the written confession, which he later claimed was false, McKenzie said: “I don’t know what came over me. It was definitely not planned. I had been feeling anxious and depressed.”

He added that he had “evil thoughts and anger”.

He said: “I think it’s very pertinent that the trial started on the anniversary of the day that she died.”

“This has been a harrowing and distressing case for all concerned. My thoughts today are with Kelly-Mary’s family, who have suffered immeasurable loss and been put through the agony of a trial.

“Their future with Kelly-Mary and Riley was so cruelly taken from them, and it is fitting that McKenzie’s future has today been taken from him.”

PM expresses sympathy for those affected by Lebanon blast

Cases linked to Aberdeen outbreak in Scotland rise by 25