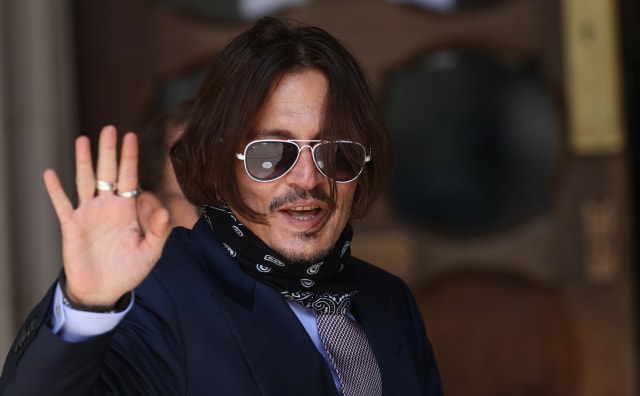 Amber Heard’s face looked “natural and normal” the day after an alleged explosive row in which she claims Johnny Depp was violent towards her, an artist friend of the actor has told the High Court.

Isaac Baruch, who has known Mr Depp for 40 years, claimed he was “around 12 inches” from Ms Heard’s face and did not see “a single mark”.

Mr Baruch is the first witness to give evidence on day nine of Mr Depp’s libel action against The Sun’s publisher News Group Newspapers (NGN) and its executive editor Dan Wootton over an April 2018 article which alleged he was violent towards ex-wife Ms Heard, 34, during their tumultuous relationship.

In a written statement submitted to the court, Mr Baruch gave his account of his meetings with Ms Heard in the aftermath of an incident on May 21 2016 in which Mr Depp is alleged to have thrown a phone at the actress and smashed objects at their Los Angeles penthouse, which he denies.

At the time, Mr Baruch was living in a neighbouring apartment owned by Mr Depp in the Eastern Columbia Building.

Mr Baruch said he saw Ms Heard on May 22 and she told him the Pirates Of The Caribbean actor “had come by the night before and got violent” and she was changing the locks to three apartments.

After a conversation with Ms Heard’s friend, Josh Drew, Mr Baruch said he went back to speak to Ms Heard, who told him that Mr Depp “hit her in the face and threw a phone at her”.

His statement said: “I then asked her where he had hit her and she stretched her neck and pushed out the right side of her head for me to look at her right eye.

“We both were standing in front of the open doorway of Penthouse 1.

“With lights from the hallway and the sunlight that came in through the windows from Penthouse 1, which filled the room and spread into the hallway, it was very easy for me to get an excellent view of Ms Heard’s face.

“I literally was around 12 inches from her, inspecting her face and I did not see a single mark or evidence of any marks, bruising, or swelling of any kind anywhere on her face. She also definitely didn’t seem to be wearing any makeup at this time of day that could cover any marks or swelling.

“Her face looked to me just as natural and normal as all the other times I’ve seen it over the past three years while hanging out together around the apartments.”

Mr Baruch’s statement also makes references to four other occasions on which he saw Ms Heard in the following few days, including once when he claims the actress knocked on his door to ask him to let her cleaning lady in.

He said: “There was plenty of light at my doorway as we stood no more than 2 to 3 feet away from each other.

“Again, I saw no marks of any kind on either side of her face. There were no bruises, scratches, redness, dark spots, or swelling of any kind.”

On Friday, the court is also due to hear from Katherine Kendall, 50, an advocate for the #MeToo movement which sprang out of widespread revelations about Harvey Weinstein’s sexual misconduct.

She has publicly accused the disgraced film mogul, who was jailed for 23 years in March after being convicted of rape and other sexual offences, of harassing her in the 1990s.

The actress and #MeToo campaigner, who will give evidence over video link from the US, is set to tell the High Court in London that she was “misquoted” in an article which labelled Mr Depp a wife beater.

In court documents from an earlier hearing in the case, Mr Depp’s lawyers said Ms Kendall will give evidence to explain how annoyed she was that the article was presented as if she was “endorsing” a comparison between the actor and Weinstein.

The court is also due to hear evidence from Travis McGivern, a member of the actor’s security team, and Laura Divenere, former interior designer to Ms Heard.