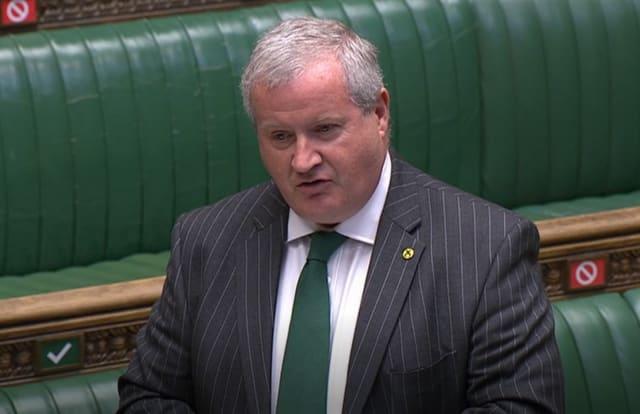 Post-Brexit arrangements which the UK Government insists will bring new powers to Scotland pose the “biggest threat to devolution” since Holyrood was established, the SNP’s Westminster leader has said.

Ian Blackford described plans to create a new “internal market” across the UK once the Brexit transition period ends as a “blatant power grab” from Westminster.

Cabinet Office minister Michael Gove has insisted a “a power surge is occurring” which will see “scores of new powers” transferred to the Scottish Parliament.

UK ministers have said the return of powers to the UK from Brussels after December 31, when the transition period ends, will see the Northern Ireland administration receive responsibility in 157 of the 160 areas, Scotland in 111 and Wales in 70.

In view of that, the Westminster Government has drawn up plans for a new “internal market” it says is necessary to ensure seamless trade between England, Scotland, Wales and Northern Ireland.

But Scottish Constitution Secretary Mike Russell insisted claims of new powers coming to Holyrood are a “lie”, as he accused Westminster of attempting one of the “most shocking pieces of dishonesty I have seen from a government”.

And Mr Blackford said: “This Tory con trick is a botched attempt to disguise a blatant power grab on the Scottish Parliament, which could see Westminster block Scotland from taking action in devolved areas.

“People in Scotland will not be fooled. Despite the smoke and mirrors, none of the so-called new powers outlined by the Tory Government are new – all are already devolved.

“Crucially, the mechanism proposed would enable Westminster to override Scotland’s democratic decisions and impose its own policies, such as lower standards for food safety, animal and plant health, and environmental protections.

“This is the biggest threat to devolution since the Scottish Parliament was reconvened in 1999.

“The SNP will resist any attempt to roll-back Scotland’s devolution settlement or block the Scottish Parliament from acting without Westminster’s permission.”

He claimed that if the proposals had already been in place, the Scottish Parliament could have been prevented from introducing key reforms including the smoking ban, minimum pricing for alcohol and free university tuition.

He warned: “We know the Tory Government is prepared to trample over Scotland’s devolution settlement to satisfy (US President) Donald Trump’s trade deal demands.

“This move would increase the risk of chlorine chicken, hormone-injected beef and ractopamine pork imports, and GM foods being imposed on Scotland against our will, and threatening our thriving food and drink industry.”

But UK Business Secretary Alok Sharma insisted without the “necessary reforms, the way we trade goods and services between the home nations could be seriously impacted, harming the way we do business within our own borders”.

Government officials said no action could see a Welsh lamb producer unable to sell their meat in Scotland, or Scotch whisky makers losing access to supply from English barley farmers.

Mr Gove said: “No promise is being reneged on, a power surge is occurring. Scores of new powers are going to the Scottish Parliament.

“No single SNP MP, MSP, councillor or activist can point to a single power currently exercised by the Scottish Parliament which is being taken away.

“There is no power grab, there’s simply an example of SNP myth-making which this Internal Market Bill finally puts to bed.

“What is actually happening here is taking away very significant powers that will have an effect on our daily lives, on food standards, on employment standards, on building standards.”

And Scottish Secretary Alister Jack said the changes – outlined in a white paper being published on Thursday for a four-week consultation – will ensure “seamless trade continues across all parts of the UK” when the Brexit transition period ends on December 31.

“Our proposals respect and strengthen devolution,” he added. “I hope the Scottish Government will work with us as we take this forward for the benefit of businesses and consumers in Scotland.”