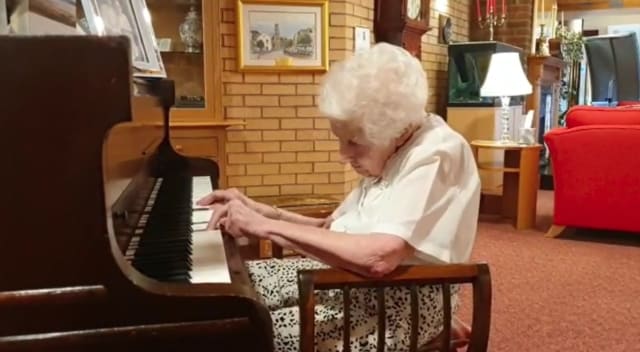 A 98-year-old care home resident with arthritis is poised to complete a charity challenge to play the piano every day for 100 days.

Retired teacher Rebecca Parker began her challenge in April and, after being inspired by the efforts of Captain Sir Tom Moore, has so far raised more than £6,000 for Lanarkshire Health Board Endowment Funds by playing the baby grand piano at McClymont House in Lanark every day since.

“I’ve been overwhelmed to be able to raise such a generous amount of money,” she said. “It’s been incredible.”

Footage of Mrs Parker playing Loch Lomond has been viewed online more than 60,000 times and has gained responses from all over the world.

Mrs Parker, who is set to complete her challenge on Saturday, said her love of the instrument began when she was a child growing up on Skye.

“My mother, Isabella MacLennan, was an accomplished pianist and that’s who really inspired all of this,” she said.

“Ultimately she had to give it up because of the demands of family life but I have vivid memories of her playing from early childhood.”

Mrs Parker said she hoped her playing provided some comfort for her fellow care home residents.

She said: “My two brothers and I would lie in beds in our home, in Broadford, Skye, and listen to her in the evenings when we were meant to be sleeping.

“It was such a source of comfort and warmth.

“I was captivated when I was growing up and my mother taught me how to play. Today, I hope the music can have the same comforting effect on my friends here.”

– To donate, go to justgiving.com/fundraising/rebecca-parker98